We are at the stage where the two leading Republicans are Donald Trump and Ted Cruz who lead the polls but also have high negatives. If these two are the only ones left standing after the early primaries, then party members, especially those in the establishment, will be forced to choose between two candidates they detest. The New York Times, as befits a paper that serves as the mouthpiece for the establishment, has editorially slammed both of them and endorsed John Kasich (and Hillary Clinton on the Democratic side), not that the Republican party base will care what the paper thinks and will actually see it as an endorsement of Trump and Cruz. 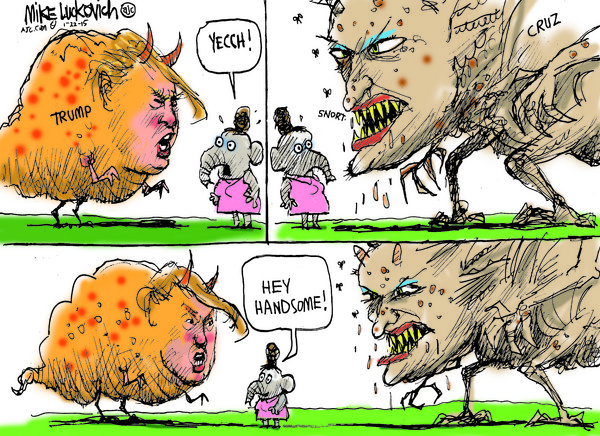 Jordan Klepper and Hasan Minhaj of The Daily Show debate as to which one is worse and find it to be a very tough call.

(This clip aired on January 28, 2016. To get suggestions on how to view clips of The Daily Show and The Nightly Show outside the US, please see this earlier post. If the videos autoplay, please see here for a diagnosis and possible solutions.)