The writers at The Daily Show and former host Jon Stewart were giving themselves high fives when Donald Trump announced that he was definitely in the race for the Republican presidential nomination because he promised to be a sure-fire source of comedy material. The must be thinking that their cup overfloweth because like Abou Ben Adhem, lo, Ben Carson turns out to lead all the rest on the roster of nuttiness.

Larry Wilmore has also been having a lot of fun at Carson’s expense, as in this clip.

Carson’s belief that he can create his own reality has extended even to basic geography. Here is a comparison of Carson’s America with the actual America. 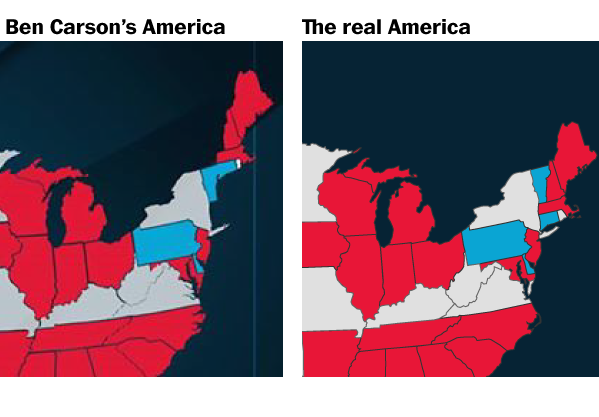 What puzzles me is that rearranging the states like that does not occur easily. This is not like people not being able to place the US on a map of the world. You have to actively work hard to get something this wrong. Could someone in the Carson camp be trying to make him look even sillier than he already does? Does someone close to him think that that American must be saved from any possibility of this ignoramus becoming president?

(These clips aired on November 18, 2015. To get suggestions on how to view clips of The Daily Show and The Nightly Show outside the US, please see this earlier post. If the videos autoplay, please see here for a diagnosis and possible solutions.)