The upcoming election of Paul Ryan as Speaker of the House of Representatives, rather than bringing about unity among congressional Republicans, has exposed the fault lines even more. And what it shows is that even the Freedom Caucus is not considered extreme enough by influential extremists of the party base. Recall that the Freedom Caucus was mainly the reason for John Boehner quitting the position. They gave him a hard time, despite Boehner being one of the most conservative members in Congress, for not being willing to shut down the government over every issue that has its base slavering at the mouth.

The Freedom Caucus was grudgingly willing to accept Ryan, the Ayn Rand-loving, ‘zombie-eyed granny starver’, as his replacement but now its own constituents and significant elements of the right-wing noise machine are angry because they see Ryan as only marginally better than Boehner, as another one of those mealy-mouthed compromisers who is unwilling to go to the mat to get what they want. And they are giving their elected representatives in the Freedom Caucus an earful for supporting Ryan.

“You truly should be ashamed,” one commenter wrote Thursday. “The people in the caucus will be held responsible come election day.”

“You should all be replaced,” a critic told Rep. Barry Loudermilk (R-Ga.). Another called Rep. Raúl R. Labrador (R-Idaho), one of the most persistent thorns in Boehner’s side, “a RINO establishment lap dog” and “another go-along to get along phony who will GLADLY step on the throats of the Conservative electorate.”
…

The anger over Ryan’s ascent has been fueled by voices across the conservative media landscape. On the Internet, sites such as Breitbart.com and the Drudge Report have pumped out a steady stream of anti-Ryan stories casting doubt on his record, while such prominent commentators as Erick Erickson, Ann Coulter and Mickey Kaus have sharpened their teeth and urged conservatives to contact lawmakers and tell them to spurn Ryan.

Particularly brutal have been the syndicated talk-radio hosts who have helped foment the anti-establishment outrage that has kept Donald Trump atop the GOP presidential race and forced Jeb Bush, a well-financed mainstream conservative, to undertake a campaign shake-up.

Laura Ingraham last week called Ryan “basically John Boehner with better abs” and featured segment after segment attacking Ryan’s positions on trade and immigration. She also mocked his desire to spend his weekends with his family.

Another influential host, Mark Levin, lambasted Ryan as a creature of the establishment elite. “I think it’s time, ladies and gentlemen, to choose a speaker from outside the House of Representatives,” he told his audience Wednesday. “This is the best the Republican establishment can do; it’s just not good enough.”

And the biggest conservative talker of them all, Rush Limbaugh, on Thursday called Ryan a favorite of the Republican “donor class” and “the new Cantor” — a reference to former House majority leader Eric Cantor, who was ousted last year in a GOP primary.

This reminds me of those old epic films in which mobs of people in the Roman Colosseum screamed loudly for the death of the hapless individual in the ring to satisfy their bloodlust. 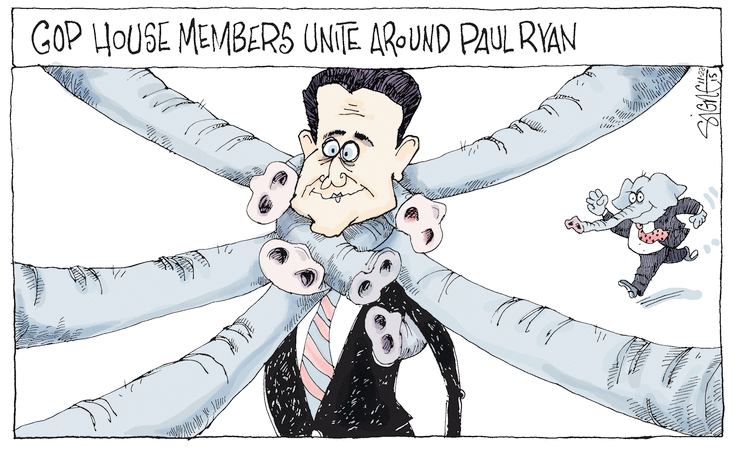 The critical points will come soon enough as the vote to raise the debt ceiling is due by about November 3, followed by the need to pass a new budget to keep the government running beyond December 11. Congress passed a stopgap budgetary measure to cover the period from October 1 through December 11 with the idea that a complete budget would be ready by then. That looks out of the question now and the issue is whether the mobs will allow even another temporary measure to pass or shut the government down just before Christmas.

The Republican party establishment must be wondering what the hell is happening. On the one hand you have crazy people like Donald Trump and Ben Carson leading in the polls for their party’s nomination for president and on the other hand you find Republican members of the House of Representatives being urged by their most extreme supporters to devour their own.

It is clear that the establishment has lost control of the party. The situation is untenable for them. It will be interesting to see what they do to launch a counter-attack and try and wrest back control. Otherwise their only alternatives are to acquiesce and be marginalized or abandon their own party.