I learned a couple of interesting things about the tragedy that occurred in Texas when rival biker gangs started fighting that resulted in nine people being killed, 18 others injured, and over 150 arrests. One is that the media are shying away from calling it a ‘riot’ or the behavior of ‘thugs’, the language that comes easily to them if the perpetrators are black. Jenny Kutner says that much milder terms are being used in this case, such as ‘melee, fracas, brawl, fistfight, brouhaha, trouble, and chaos’ (CNN) and ‘shootout, fight, chaos, confrontation, problems’ (New York Times). Brouhaha? For something that resulted in such carnage?

The second is that I initially didn’t pay much attention to the restaurant where the fight started. I have since learned more about this chain that has the name Twin Peaks and it apparently is doing booming business as part of what is known as ‘breastaurants’, that feature scantily clad waitresses and, according to internal company memos, this is a carefully targeted marketing strategy based on a very simple model of the male psyche.

Twin Peaks attributes its success to a basic understanding of the sexes. “Men are simple creatures and so you don’t have to get too crazy to get them in the door,” Kristen Colby, the director of marketing for Twin Peaks franchise, told the Huffington Post earlier this year. She said that beer, sports, and beautiful women are all it takes.

An internal branding memo provided to ThinkProgress from a current employee at a Twin Peaks restaurant, who preferred to remain anonymous over fears about losing their job, backs up that claim. That employee said the memo was distributed to all the franchises nationwide, as well as handed out to waitresses.

According to the document, the restaurant wants to target guys “who love to have their ego stroked by beautiful girls,” and promises to provide an environment “that feeds their ego with the attention they crave.” They describe their typical customer as someone who likes “attention from beautiful girls and being recognized in front of the guys,” as well as someone who doesn’t want to be asked what he’s thinking.

Here is a promotional photograph of waitresses and a customer at a Twin Peaks restaurant in Texas. 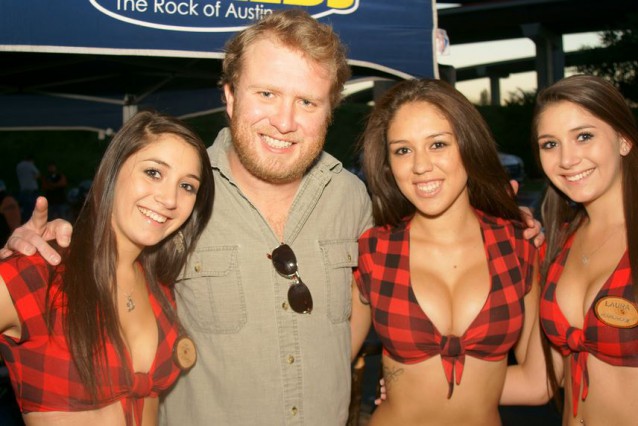 I am beginning to suspect that the name Twin Peaks is not, as I first thought, an allusion to the 1990-1991 TV show that developed a cult following.

Even the CIA now admits that Dick Cheney lied about Iraq » « Review: Secrets, Politics and Torture vs. Zero Dark Thirty