Laura Poitras won an Academy Award yesterday for her documentary Citizenfour about Edward Snowden that I reviewed favorably. In this photo from the awards ceremony last night, we see the three winners: producer Dirk Wilutzky (far left), Poitras next to him, and editor Mathilde Bonnefoy (far right). Glenn Greenwald and Snowden’s girlfriend Lindsay Mills (who now lives with him in Moscow most of the time) joined them on the stage 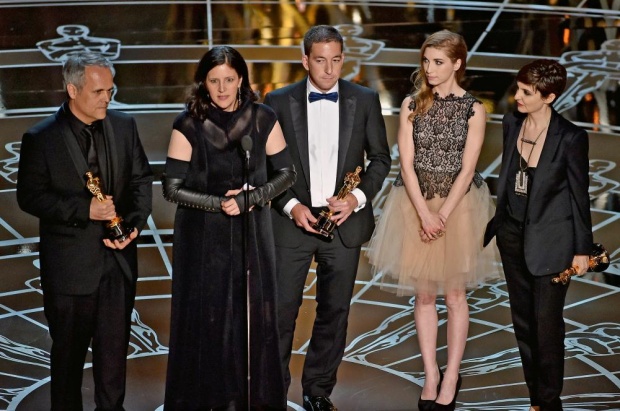 Thank you so much to the Academy. I’d like to first thank the documentary community. It’s an incredible joy to work among people who support each other so deeply, risk so much, and do such incredible work. We don’t stand here alone. The work we do to (unveil?) what needs to be seen by the public is possible through the brave organizations that support us. We’d like to thank Radius, Participant, HBO, BritDoc, and the many, many, many organizations who had our back making this film.

The disclosures that Edward Snowden reveals don’t only expose a threat to our privacy but to our democracy itself. When the most important decisions being made affecting all of us are made in secret, we lose our ability to check the powers that control. Thank you to Edward Snowden for his courage, and for the many other whistleblowers. And I share this with Glenn Greenwald and other journalists who are exposing truth.

Snowden himself issued a statement:

“When Laura Poitras asked me if she could film our encounters, I was extremely reluctant. I’m grateful that I allowed her to persuade me. The result is a brave and brilliant film that deserves the honour and recognition it has received. My hope is that this award will encourage more people to see the film and be inspired by its message that ordinary citizens, working together, can change the world.”

Jeremy Scahill’s excellent documentary Dirty Wars was nominated last year but did not win. (See my review of his book and his film.)

I am not a big fan of these exercises in self-indulgence and self-congratulation where an industry gives awards to itself and did not bother to watch. The only benefit is if this recognition leads to greater viewing of Citizenfour and makes it easier for Poitras to get funding for more films.