It is a little frustrating that we cannot see the workings of our own brain without the aid of external devices. But optical illusions are a fun way of getting some insight into the interplay of vision and cognition. I have a fondness for optical illusions and have shown and written about some of them in the past (see here, here, and here). There is something about the way that our brain manipulates the visual input to create something new and sometimes dynamic that fascinates me.

Now via Maggie Koerth-Baker I learned about another optical illusion that tells us something more directly about our brain’s workings, especially something called alpha waves that were discovered by Hans Berger soon after he invented the EEG machine. Neuroskeptic explains:

Alpha waves are generated by rhythmical changes in neuronal activity, mainly centered on the occipital cortex. Occipital activity is what makes us see things. So why don’t we see something roughly 10 times every second?

Hence the value of this particular illusion. 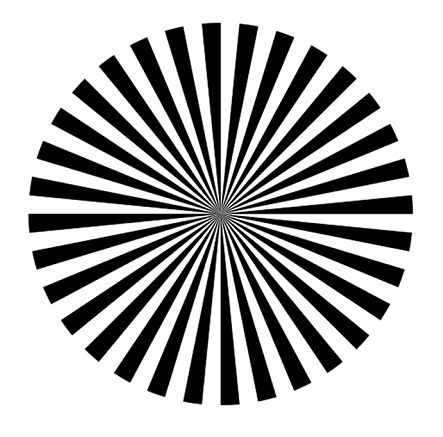 To see the illusion, get the wheel in your peripheral vision. Look around the edge of your screen and maybe a bit beyond – you should find a ‘sweet spot’ at which the center of the wheel starts to flicker’ on and off like a strobe light.

Researchers studying it have published a paper that argues “that the flickering of the wheel is related in some intimate way to alpha.” Here is the abstract:

α oscillations (8-14 Hz) greatly influence brain activity, yet we generally do not experience them consciously: the world does not appear to oscillate. Dedicated strategies must exist in the brain to prevent these oscillations from disrupting normal processing. Could suitable stimuli fool these strategies and lead to the conscious experience of our own brain oscillations? We describe and explore a novel illusion in which the center of a static wheel stimulus (with 30-40 spokes) is experienced as flickering when viewed in the visual periphery. The key feature of this illusion is that the stimulus fluctuations are experienced as a regular and consistent flicker, which our human observers estimated at ∼9 Hz during a psychophysical matching task. Correspondingly, the occipital α rhythm of the EEG was the only oscillation that showed a time course compatible with the reported illusion: when α amplitude was strong, the probability of reporting illusory flicker increased. The peak oscillatory frequency for these flicker-induced modulations was significantly correlated, on a subject-by-subject basis, with the individual α frequency measured during rest, in the absence of visual stimulation. Finally, although the effect is strongest during eye movements, we showed that stimulus motion relative to the retina is not necessary to perceive the illusion: the flicker can also be perceived on the afterimage of the wheel, yet by definition this afterimage is stationary on the retina. We conclude that this new flickering illusion is a unique way to experience the α rhythms that constantly occur in the brain but normally remain unnoticed.

So watch the illusion and enjoy (maybe) seeing your own brain’s alpha waves doing their thing.