One sign of an authoritarian society is how authorities react to those whom they feel are not properly subservient to them. The American people are slowly being conditioned to be obsequious to government power. Mike Spindell writes about a bill being discussed in the New York State Senate that would make it a felony to, among other things, ‘annoy’ a police officer in the course of his duties. He gives a long list of cases where the police have taken offense at people who were acting perfectly legally but not subserviently. 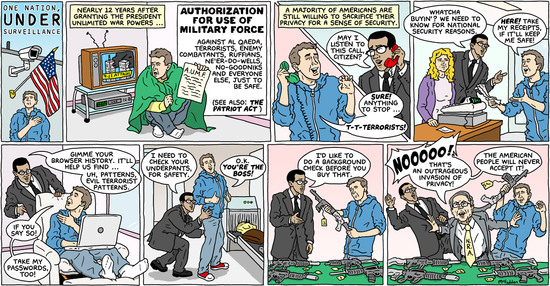 On Memorial Day, in Miami, a 14-year-old black kid named Tremaine McMillan was walking down the beach with his mother–and bottle-feeding his puppy–when cops blocked his path in ATVs. A few minutes before, the kid had been rough-housing in the surf with a friend, and the cops wanted to question him about it.

Moments later, the cops body-slammed the boy—still holding his puppy—onto the beach, got him in a chokehold, and arrested him for resisting arrest.

So far, so sickeningly normal.

But in this case, the police’s cover-story for the body-slam, the chokehold, and the kid’s subsequent arrest—that he was “clenching,” or, in other accounts, “flaring” his fists–was hard to sell, due to one small but troublesome fact: cellphone video showed that the kid never stopped cradling his puppy. So the police spokesman invoked a truly terrifying specter: the teenager, he said, was giving the cops “dehumanizing stares.”

Jonathan Turley writes about another black man who, despite passing a sobriety test, was still arrested for drunk driving because his eyes were red. He later scored 0.00 on the breathalyzer test.

Another step forward for the godless » « Do large objects behave quantum mechanically?