In the search for the Higgs particle, we had to overcome two problems: producing it and detecting it. Both those things are difficult and I will first look at the detection part.

The Higgs particle is unstable, in that left to itself it lasts for a very short time. We know this since its mass is much greater than that of other elementary particles and so it should decay into them. As such, in order to detect it, one has to first set up the conditions to produce it and then find ways to detect it either before it decays or, if that is not possible, to find ways to infer that it had existed for a short time. The production and detection of unstable particles like the Higgs stretched the limits of what we can do with current technology (and budgets) and provides a window into the world of particle physics. (For previous posts in this series, click on the Higgs folder just below the blog post title.)

When we say that we ‘detect’ an elementary particle, what we mean is that it entered some chamber that allowed some property of that particle to interact with some components of the detector that in turn created some kind of electrical signal that could be magnified and used to enable us to determine those properties that uniquely determine the identity of the particle being sought, such as its mass and electric charge.

The most common ways in which new particles are produced is in the collisions of one stable particle with another at energies that are sufficient to produce new particles with the required mass. The greater the mass of the desired particle, the higher must be the energies of the colliding particles. In particle physics accelerators like the Large Hadron Collider, the sought after particles are produced in collisions between beams of protons traveling in opposite circles that do not overlap except in selected small target areas where the beams intersect with each other and collisions can occur.

Protons are composite objects consisting of quarks and gluons and as a result these collisions are messy and have been compared to smashing two clocks together and trying to make sense out of the many objects that come flying out. As a result of those collisions, new particles are produced that travel out in all directions. In order to detect them, the detectors are usually cylindrically shaped with the colliding beams moving along their axis, so that the produced particles can be detected whichever direction they emerge. The figure shows the ATLAS detector, one of the two used at the LHC. The inner tube is what the protons beams travel through in both directions to the collision area (in the middle of the yellow area), and the detectors surround the beams. Note the two little people in red that give you some idea of the scale. We see that the detectors are of the order of meters from the collision area. 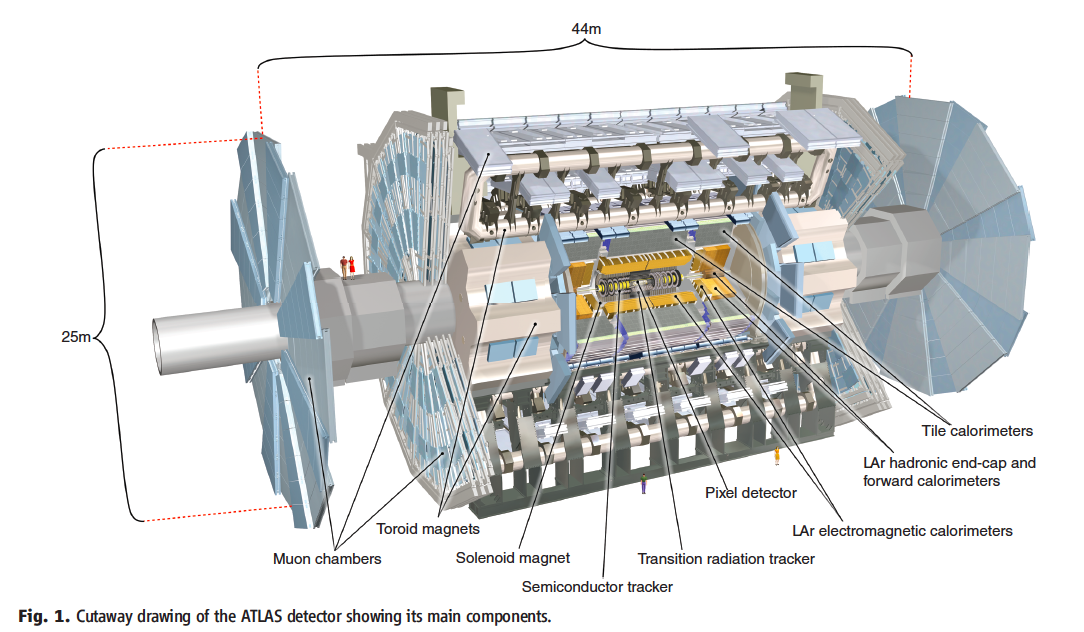 In order to directly detect the produced particles, the particles have to live long enough that they can travel the distance from the production point to the detectors. But if a Higgs is produced in a collision, does it live long enough to do so? To calculate how quickly an unstable particle decays into more stable particles, we need to know the mass of the initial particle and the masses of those produced by the decay, as well as the strength of the interaction between the initial particle and the decay particles. As I said in the previous post in this series, we knew the interaction strengths of the Higgs particle with other particles even before we detected the Higgs, so only the mass of the Higgs particle was unknown. Hence we could calculate how quickly the Higgs particle would decay for any given value of its mass.

It turns out that for an reasonable range of mass values, the Higgs, once produced, lives for a very short time, only about 10-21s, too short to measure it directly. Even if it were traveling close to the speed of light (3×108m/s), it would only travel a distance of about 3×10-13m (obtained by multiplying its lifetime by its speed).

Like all other extremely short-lived particles, the Higgs decays into other particles which, if they are also short-lived, in turn may decay into yet more particles until we get ones that live long enough to reach the detectors. What are the particles that the Higgs can decay into that can exist in a free state and live long enough that they can reach the detectors? Amongst the 18 elementary particles, the six quarks and the gluons are never seen as free particles but only as parts of composite systems. If one of them heads towards the detector, it creates a bunch of new composite particles (called ‘jets’) that are too complicated to analyze, so they do not help. The three neutrinos and the graviton are so weakly interacting that detecting them is extraordinarily difficult and require their own experiments and they are not usually looked for.

That leaves us with just the W+, W–, Z, electron, muon, tau, and the photon. The best candidates are those that are stable (i.e., do not decay) like the electron and the photon but what about the others? The lifetimes of the W and Z particles are about 3×10-25s, even shorter than that of the Higgs, so they are of not much use. The tau has a lifetime of about 3×10-13s, also too short. That leaves us with just the muon. The muons are unstable but live long enough (about 2×10-6s) that they can travel about 600 meters before decaying and thus can be detected.

So the detectors are designed to detect photons, electrons, and muons. But we immediately see a problem. Recall that the strength of the interaction of the Higgs particle with other particles depended on the mass of those other particles. The photon is massless, which means that the Higgs does not interact directly with the photon and hence cannot directly decay into two photons. Also, the electron and the muon have very small masses, so the strength of their interaction with the Higgs is also very small, which means that the probability of the Higgs decaying directly into an electron-antielectron pair or a muon-antimuon pair is also very small.

Hence we have the troublesome situation that the particles that we are able to detect are the ones that are either forbidden or are the least likely to be directly produced in the decay of the Higgs and this was yet another of the difficult problems that had to be overcome at the LHC.

Next: How the Higgs was identified