I deliberately left this one to stew, in case I could think of a better angle. Alas, you just can’t beat perfection.

[3:02] Not only were you the one calling for action on the basis of your unfounded assertions:

[1:15] In a nutshell, I find the arguments and logic that currently permit transgender women to compete against biological women to be remarkably flawed, and I’m convinced that unless quickly rectified, this will KILL women’s sports.

[14:00] I don’t want to see the day when women’s athletics is dominated by Y chromosomes, but without a change in policy, that is precisely what’s going to happen.

[3:20] but it also fails to take into account the fact that said actions would be in direct violation of numerous human rights belonging to trans women. This is something I started with in my original response, and rather disturbingly has been missing from every video on the subject you have done. Including this one. The point is simple: when it comes to making ethical decisions, which this very much is, one should always default to the position with the least potential to cause harm. On one hand we have the active violation of numerous human rights of trans women. On the other we have …

… Well, you along with everyone else have failed to demonstrate anything on that level. About the worst thing I’ve seen are claims that records would become over-saturated with trans women. But here’s the important thing to remember. Records are just that. Records. They can always be reverted if it is ever shown that trans women do in fact possess some unfair advantage and should be barred from competing with cis women, whether as a whole or in specific categories.

Rationality Rules has tried to shift the burden of proof onto people who wish to treat all transgender women as women, on the grounds that he’s proven some transgender athletes have advantages in some sports. Not only has he failed to do that, but as you can read above Essence Of Thought then pulled out the human rights card. RR’s response was to ignore both his failure and the human rights argument, and blindly reassert that he doesn’t have the burden of proof.

[14:19] And yes, considering the many benefits of male puberty, the burden is on those who were asserting that HRT sufficiently mitigates said benefits. […]

[16:36] … in explosive events – such as weight lifting, combat sports, hammer throw, and sprinting – I not only think that the burden has not been met, I think that the research that we have done has made it heavier than ever.

So what can I bring to the table? 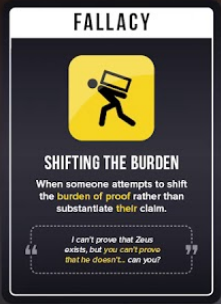 RR’s game to teach you logical fallacies has a “Shifting the Burden” of proof card. In fact, the YouTube play-through features it on the title card! This is another instance of him being guilty of logical fallacies that he can’t claim to be ignorant of.

Begging the Question » « Lies of Omission