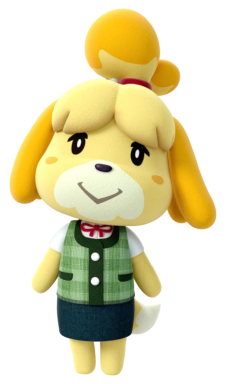 Isabelle is very clumsy, absentminded and dislikes confrontation. Despite this, she is respectful of others and is very friendly. Being open-minded and outgoing, she is very keen to make the town a better place to live by encouraging the player to do tasks and Public Works Projects throughout the town. Like many other secretaries, she can be hard on herself when she is side-tracked, and as a compulsive workaholic, she neglects her physical health in the name of her occupation. Isabelle has shown sides of gratitude and affection to the player, especially on Valentine’s Day and is even hinted on having a crush on the player regardless of gender.

Emphasis mine. As one of the few canonically bi characters in a video game, and a flirty one at that, she quickly became a fan art favorite. On a lark, someone set up an “Isabelle Facts” account which tweeted out fake and not-so-fake facts about Isabelle.

“I see Animal Crossing as a whole as a very queer- and trans-inclusive series as it is!!” @isabelIeduh [the creator of Isabelle Facts] told the Daily Dot during that initial interview. “With the characters being allowed to dress in any gendered clothes and the game not excluding anything from your gender choice! You can basically play as who you see fit! And Isabelle’s popularity of being an innocent dog who just wants to help everyone really fit in!! Myself and friends included are all queer/trans and adore Isabelle as a character and we love the idea she accepts us for who we are!!”

Isabelle Facts’ popularity walked hand-in-hand with fans’ sheer love for Isabelle. One fact from Valentine’s Day claimed: “Isabelle is everyone’s Valentine today!!” Another popular post, fact 68, said Isabelle’s smile “has been proven to help those feeling down” and “radiates so much sunshine and happiness.” That post had over 480 retweets and 1,200 likes in just 24 hours after it was posted, and it was also one of @isabelIeduh’s personal favorites.

In line with the paradox of tolerance, though, Isabelle Facts took a hard line against TERFs. You can guess what happened next.

“I took Isabelle Facts down after so many death threats I got regarding my one post about TERFs—then eventually any post I previously made, like the trans and gay rights ones,” @isabelIeduh explained after being approached by the Daily Dot after Isabelle Facts’ deactivation. “I took a break for a few days and then saw people saying I was suspended due to mass reports (which was false because I took it down originally if that makes sense). I reactivated to clear rumors and decided I’m going to completely delete because I got way more hate after reactivating than I thought would appear.”

While @isabelIeduh said that they wanted to recreate Isabelle Facts, they aren’t quite sure if they can handle the experience all over again. While similar Isabelle Facts accounts have since popped up, such as @isabellefacts1, they’re also concerned that other users who run their own accounts may face harassment as well.

As I’ve mentioned before, if TERFs really were “Gender Critical” you’d think they’d embrace someone who violates gender stereotypes. Yet again, their “critique” is revealed as a fig leaf over a hatred of non-conforming women and non-binary people.

I Think I Get It » « Some Much-Needed Follow-up