This may be hard to believe, but I’m not about to talk about Bayesian modeling nor CompSci. Nope, I got dragged into an argument over implicit bias with a science-loving “skeptic,” and a few people mobbed me over the “model minority.”

Asian-Americans, like Jews, are indeed a problem for the “social-justice” brigade. I mean, how on earth have both ethnic groups done so well in such a profoundly racist society? How have bigoted white people allowed these minorities to do so well — even to the point of earning more, on average, than whites? Asian-Americans, for example, have been subject to some of the most brutal oppression, racial hatred, and open discrimination over the years. In the late 19th century, as most worked in hard labor, they were subject to lynchings and violence across the American West and laws that prohibited their employment. They were banned from immigrating to the U.S. in 1924. Japanese-American citizens were forced into internment camps during the Second World War, and subjected to hideous, racist propaganda after Pearl Harbor. Yet, today, Asian-Americans are among the most prosperous, well-educated, and successful ethnic groups in America. What gives?

What gives is simple demographics. Take it away, Jeff Guo of the Washington Post: 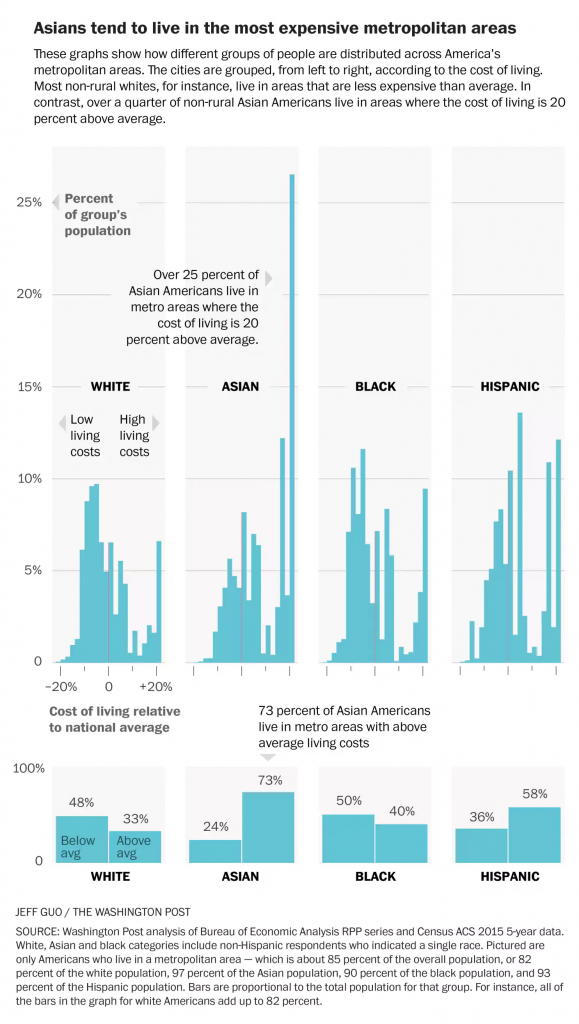 Asian-Americans tend to cluster in more expensive districts than people of other races. This has a big impact on their income: you need more money to live in an expensive place, thus your median income must be greater than someone who’s in identical circumstances save a cheaper house. As luck would have it, this also wipes away the median income cap between whites and Asian-Americans in the US. 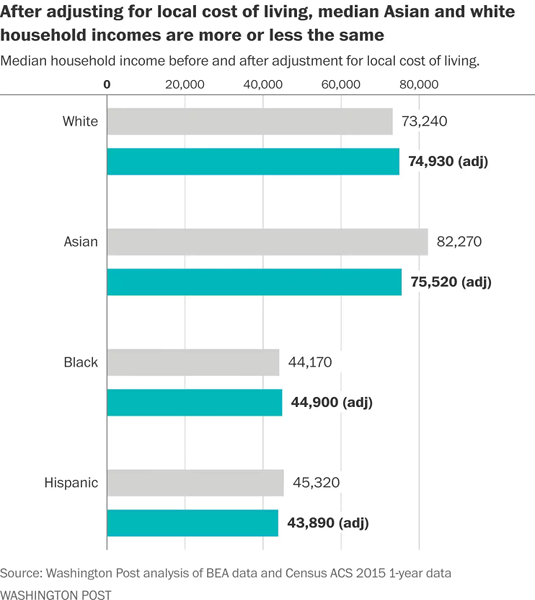 Mind you, that still leaves the large gap between Asian-Americans and Black or Hispanic Americans. What could explai-

This capital includes ethnic institutions — such as after-school tutoring programs and after-school academies — which highly educated immigrants have the resources and know-how to recreate for their children. These programs proliferate in Asian neighborhoods in Los Angeles such as Koreatown, Chinatown and Little Saigon. The benefits of these programs also reach working-class immigrants from the same group. […]

This advantage is not available to other working-class immigrants. Mexican immigrants, for example, are largely less-educated, low-wage workers because they arrived to the United States as a result of different immigration policies and histories. Theirs is a largely low-wage labor migration stream that began en masse with the 1942 Bracero program and continues today.

Oh right, an immigration system that filters out all but the wealthiest and highest-educated from Asia, and that wealth/education feeds into local programs which maintain the advantage cross-generation. Thanks, Jennifer Lee of CNN! About my only complaint is that you don’t try to put a dollar figure to discrim-

Asian Americans are the only non-white US racial group to experience long-term, institutional discrimination yet today exhibit high income. I reexamine this puzzle in California, where most Asians settled historically. Asians achieved extraordinary upward mobility relative to blacks and whites for every cohort born in California since 1920. This mobility stemmed primarily from gains in earnings conditional on education, rather than unusual educational attainment. Historical test score and prejudice data suggest low initial earnings for Asians, unlike blacks, reflected prejudice rather than skills. Post-war declines in discrimination interacting with high initial skills can account for Asians’ extraordinary upward mobility.

-er, oh, thanks Hilger! Yeah, that must be another factor, the decreased discrimination that A-

Often in history, Asian-Americans cultural values have been lauded as a way to enable interracial tension. The term “model minority” seems to have been first coined during the Civil Rights Movement in a 1966 New York Times article entitled “Success Story, Japanese American Style”. The positive stereotype caught on, influencing articles such as U.S. News and World Report’s “Success Story of One Minority Group in U.S.” in 1968, Newsweek’s “Success Story: Outwhiting the Whites” in 1971, and the Time magazine’s 1987 cover headlining “Those Asian-American Whiz Kids”. These sensationalized articles similarly argue: if Asian-Americans can “work hard” and “never complain”, why aren’t other racial groups following suit? Cultural normalization and perpetuation of the model minority label operates as a racial wedge that divides Asian-Americans from communities of color while maintaining white dominance in leadership (i.e. the “bamboo ceiling”) and politics.

Uh, oh, I guess the reduced discrimination wasn’t due to a crisis of conscience, but a desire to pit one race against another. Good to know, Bernadette Lim. I guess th-

Why is there only one check-box on official forms for Asian Americans when, as a group, they represent 48 culturally diverse countries and have a population of over 17 million people? […]

Let’s consider metropolitan Los Angeles County. Tongan (78%), Bangladeshi (57%), and Cambodian Americans (53%) in Los Angeles County have higher rates of poverty than any other racial group, including Latinos (51%) and African Americans (40%). Yet the overall Asian American poverty rate–significantly lower than other groups at 27%–is skewed by high-performing groups, such as Taiwanese (19%), Indian (19%) and Japanese Americans (18%). […]

“But Los Angeles is an anomaly,” you may be thinking. But, if we look to metropolitan Dallas, which has a lower overall population of Asian Americans, we see that Burmese (31%) and Nepalese Americans (33%) have higher poverty rates than any other racial group, again including Latinos (23%) and African Americans (21%). Yet the Asian American poverty rate in Dallas is 11%, about a third of the poverty rate of the Asian American subgroups most in need. A third of Burmese and Nepalese Americans live in poverty and yet both, are still subject to a constrictive stereotype of academic and financial success. This stereotype tells us that these groups are a privileged minority, and thus they have no reason to protest or seek help.

Head east to the nation’s capital and the trend continues. In the D.C. area, Nepalese (16%), Indonesian (16%), Pakistani (14%) and Burmese (14%) Americans have the highest rates of poverty. The only other ethnicity that comes close is African Americans, whose poverty rate stands at 14%. With the Asian American poverty rate at 6% (almost the same as the poverty rate for whites, at 5%), the struggles facing Asian American subgroups is easily swept under the rug and out of sight.

Ah, so even invoking the term “model minority” is racist, because it treats a diverse group with wildly different incomes as a monolith. Interesting contribution, Lillian D. Singh and Karishma Shamdasani.

… Sooo… I guess that wraps 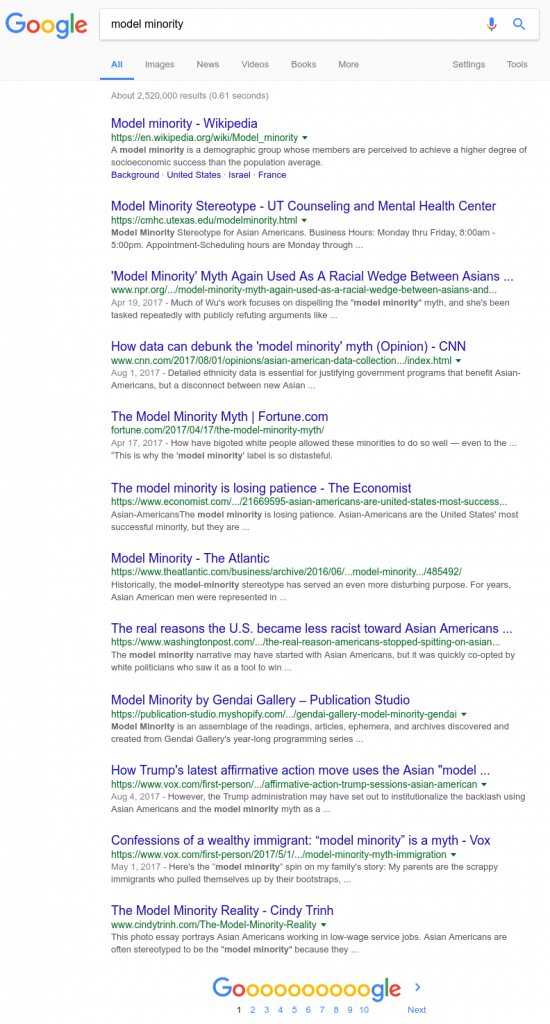 Wow, no wonder I keep getting swarmed: Google is clogged with articles debunking the model minority myth. And yet, somehow, the friends of this “skeptic” acquaintance of mine were completely oblivious to the crushing weight of the evidence, while this “social justice warrior” is more in touch with reality.

Never saw that one coming.

Above the Drama » « Fake Hate, Frequentism, and False Balance