Trigger Warning: I’ll be posting about what I see as examples of rape culture in action so this one is under the fold.

You don’t shame concern for rape accusations in this culture, and if we actually took this issue seriously as a society it wouldn’t be politically inconvenient. We’d just go through the process.

Now that’s certainly attention grabbing. I can understand feeling strongly about it. But becoming part of rape culture isn’t the answer. Let’s chop up some examples.

This is pretty simple and to the point. “STFU”. “Shut The Fuck Up”.
“Silence your concerns about rape.” My friend’s concerns are political inconvenience. It doesn’t matter if they’re true of not, my friend needs to stop being concerned.

Seriously? In this culture you’re going to tell someone concerned about rape to shut up? This kind of thing is why people like Trump get away with it too.

“Non-votes are votes! Non-support is support!”

A non-action is not an action. It’s insulting because it ignores the problem someone has with Biden and replaces it with an order. You want help with your political opponent and expect to force through shame someone instead of offering something in return.

One of these days I need to write about my process more clearly, but a big part of it is taking people’s claims seriously. That’s the simplest way for me to figure out if it’s true or not.

When someone says that something isn’t true it shouldn’t be hard to get them to show the false thing. I do this for “fake news” and many other things too.

The politically useful thing to do in this sexually defective country is have a discussion about what convinces someone of something, and help them with their social concern in return for their vote. Otherwise I point out how you are a part of rape culture here. 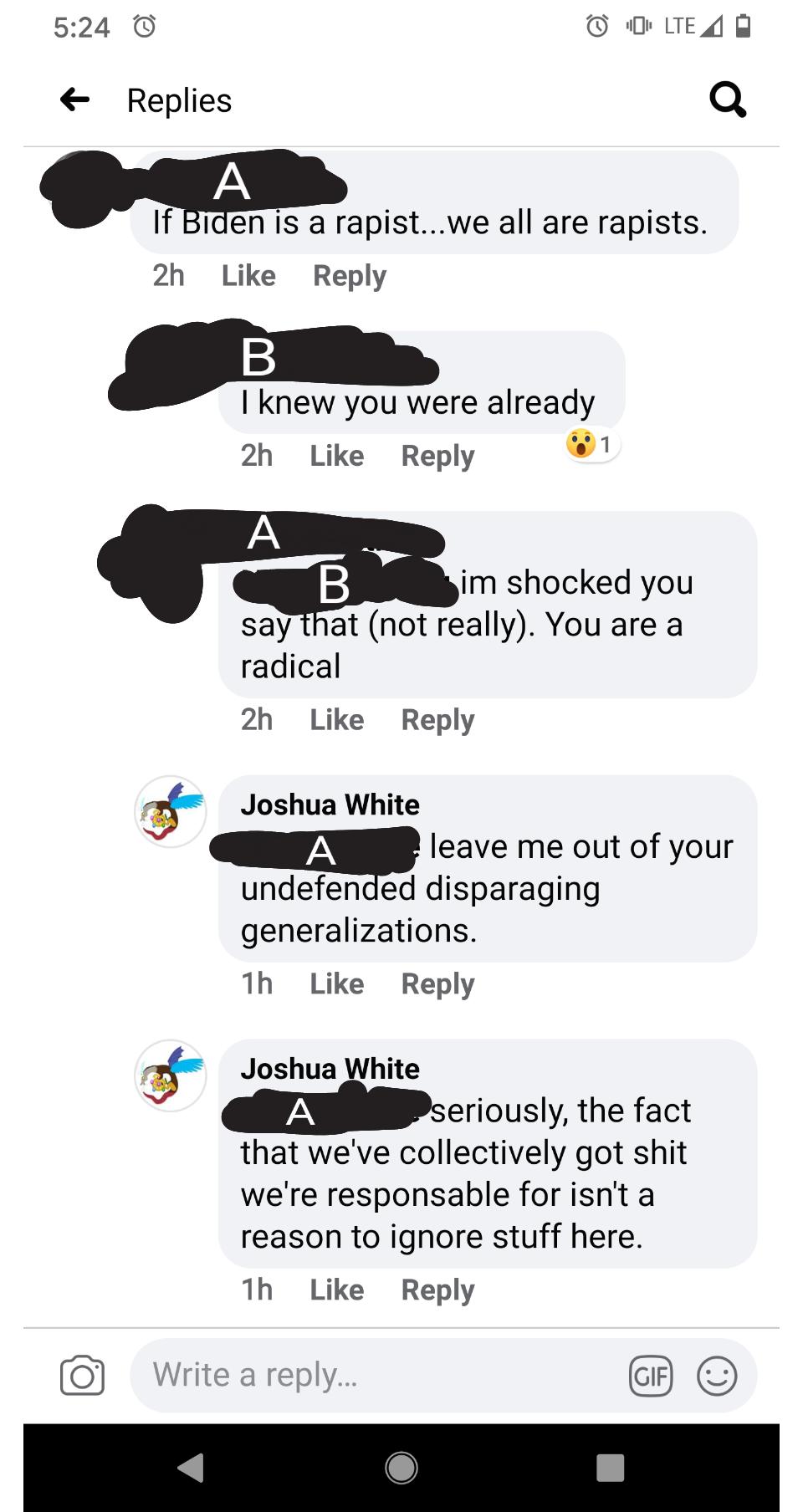 I don’t know what to title this one. It’s trying some kind of collective something.

A:”If Biden is a rapist…we are all rapists”.
Where do I start? I feel my response was charitable and I included the second response just to make sure something more socially responsable was in there.
The best I can say is they’re acting like the idea of Biden being a rapist is rediculious and they don’t feel the need to explain how. Do you notice how the ellipses totally neglect the logic that connects the statements?

I’m going to call this another form of mockery that appeals to the crowd. I’m part of that crowd and think mocking concerns about rape in our culture is a bad thing. I’m not against mockery, far from it. I believe mockery is wrong here. Use persuasion. Find out why someone is concerned.

Overt misogyny and sexism. 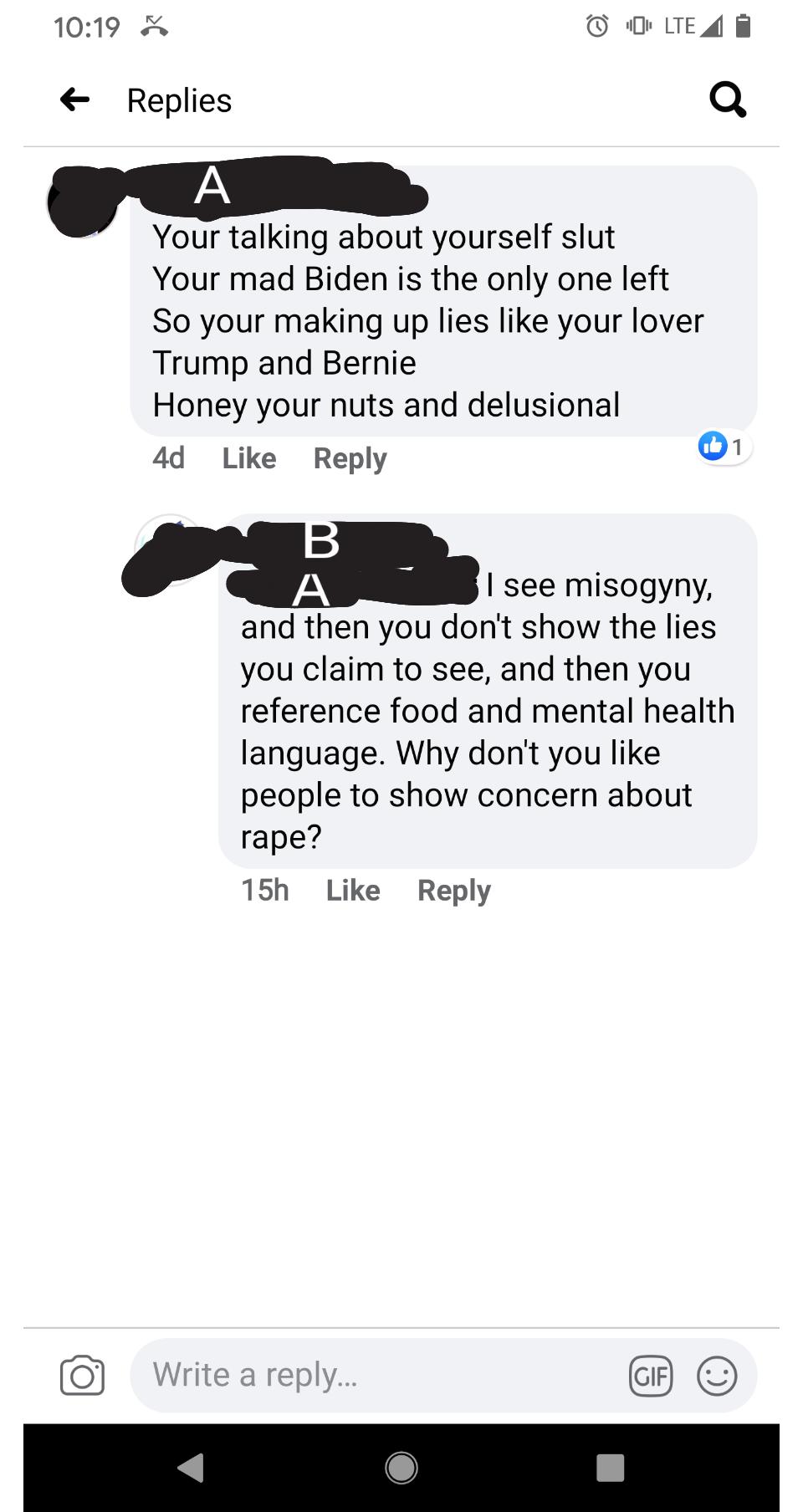 This is the easy one to criticize so I posted it later.
A: “Your talking about yourself slut”
Slut: a misogynistic slur meant to control sexuality. How could my friend be talking about herself? Is it a simple “no you’re the rapist”? I’m wondering about connections to false accusations but maybe it’s a stretch to think A is accusing my friend of being a false accuser. It’s disgusting either way.
A: “Your mad Biden is the only one left”
My friend is literally concerned about rape and this person has to accuse them of lying and asserting that it’s about the election. Based on nothing. Trump and Bernie as lovers? This is another false portrayal of my friend as a supporter, but in rage and not mockery.”Honey…” is condescending sexism, “…nuts and delusional.” is insulting ableism appealing to mental illness language. This person has a lot of personal flaws.

I asked my friend if they wanted me to use a particular example after I collected my screen shots and they directed me to another post. I had already gotten involved in this one.I should mention that there’s more than one issue in the meme. I’m doing the shaming of concern about rape. 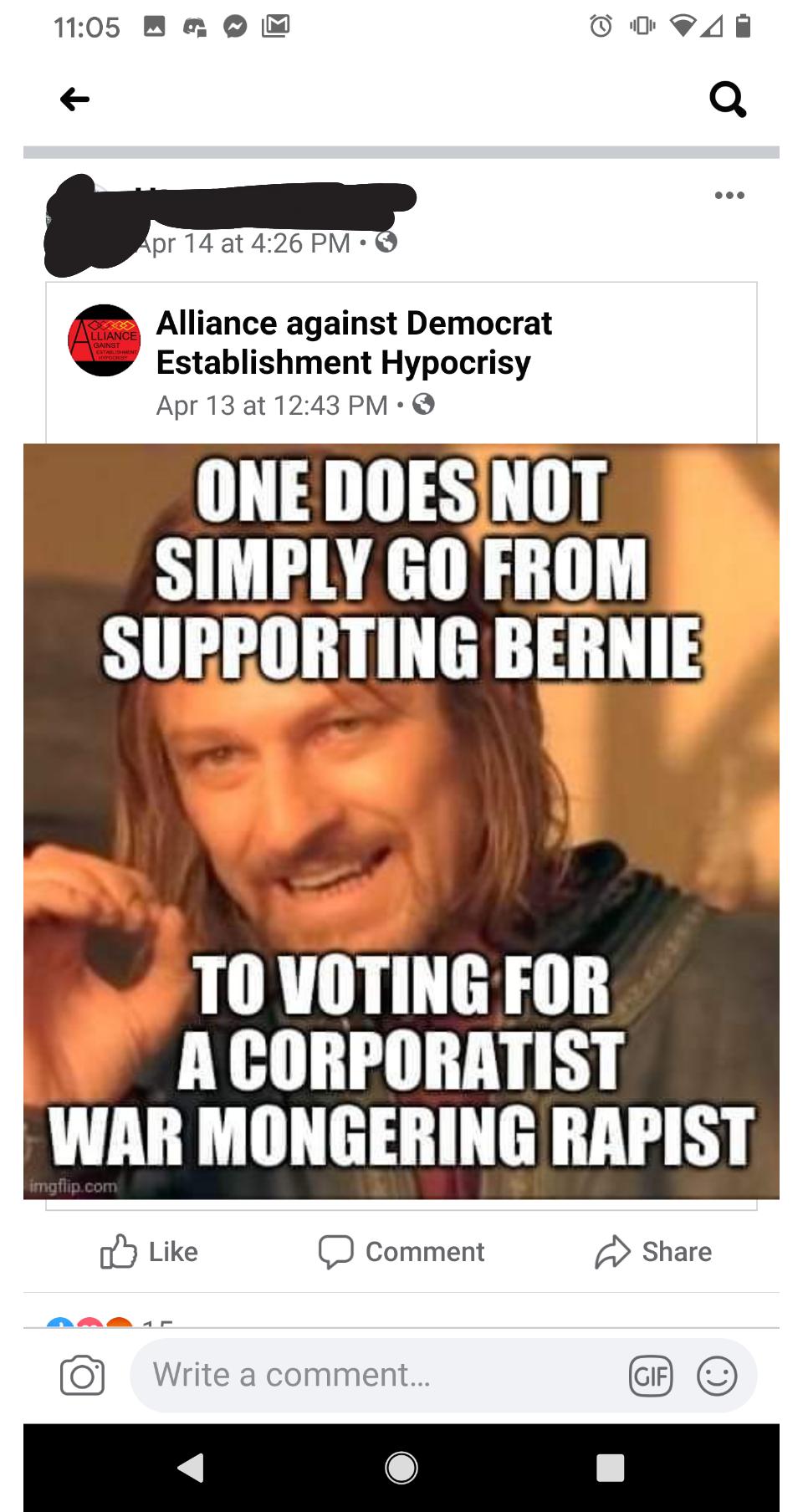 That’s about as attention getting as the first one. Each of those things worth being concerned about. Same as before it’s reasonable to be concerned about a rape accusation. I want the Democratic party to do a proper investigation. It’s as disgusting as the other thread and in new ways. It made my friend feel sick. There’s so much to say.

A pattern to note is how many avoid the concerns my friend has. These examples don’t ask why my friend is concerned, even to disagree. These treat my friend’s concerns as political threats and inconveniences.

I’m not doing everything, and people can feel free to spot things they see. In fact I bet there’s lots of things that that other perspectives would see that mine doesn’t.

After the Bernie adoration the first bit interesting to me is this.
The “that” is voting for Biden, the “man” is Bernie.
A: “People who don’t do that too must not really care anything for what the man says or does.”
They deliberately avoided my friend’s concerns about Biden, and replaced them with a reference to things Bernie says and does. They’re shaming my friend and my friend is concerned about a couple of things including rape, and that is turned into an accusation that they must not really “Bern” with love.

Concerns about rape and Biden become “… lip service and temper tantrums.” And then they order my friend to “Do better”. Person A is making orders instead of respecting concerns.

And then A keeps lying. They continually accuse my friend and person C of not “trusting Biden”. When asked by B towards the end of Part 1 why A totally ignored the sexual assault question, they told them to ask Bernie about the issue.

That’s not telling someone why you’re totally ignoring their concerns. To me that’s changing the subject like a political coward. 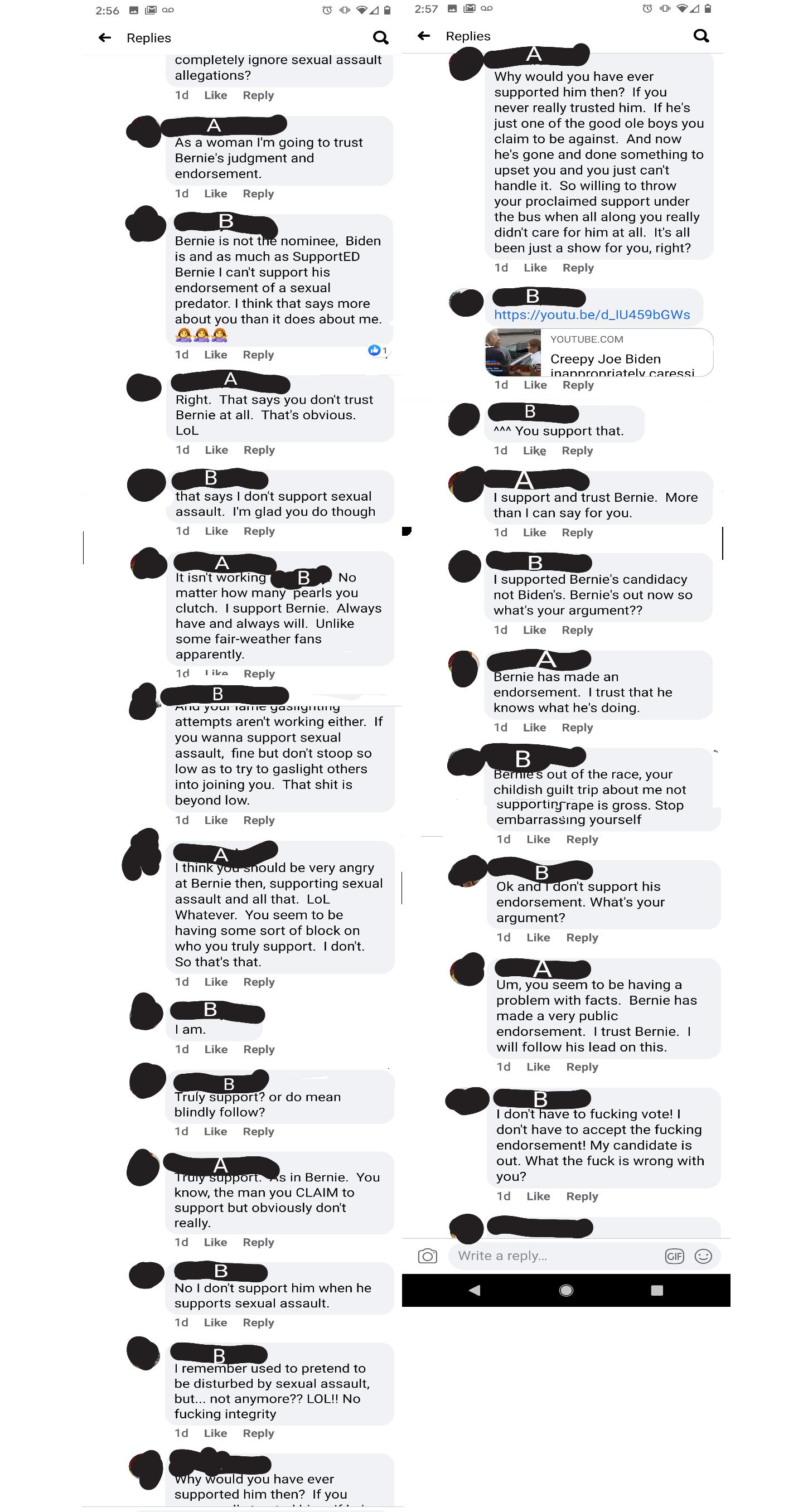 Person A continues the “you must not really trust/support Bernie” dance, and in the fifth post in on the left on part 2 I notice this.
A: “It isn’t working B. No matter how many pearls you clutch. I support Bernie.”

It’s not about Bernie Sanders, it’s about concerns about Joe Biden. More lies. More twisting of what’s actually happening. Person A will probably go on to tell people my friend, and others too probably, don’t trust Bernie, instead of correctly saying they’re concerned about Biden.

I am sickened by such political lies. It’s of a kind with “you’re voting for Trump” or “you’re supporting Trump”. No, they’re fucking not you liar.

In the first post on the right I see other features. Polerized thinking by Person A with respect to the authority figure.
“Them” and “him” is Bernie.
A: “Why would you have ever supported them then? If you never really trusted him.”
They can’t or won’t accept that someone can support a candidate on some things but not another. It’s all or nothing, either my friend has to support everything or they never supported anything evidence unnecessary.

All my friend is to Person A is a political tool to be mocked and lied about when their concerns about Biden and become inconvenient.
Towards the end of Part 2 my friend asks what Person A’s argument for Biden is and, wow.

A: “Um, you seem to be having a problem with facts. Bernie has made a very public endorsement. I trust Bernie. I will follow his lead on this.”
This is a person who can’t deal with the fact of my friend’s concerns about Biden and rape. So there’s some projection.

If Bernie Sanders’s endorsement of Joe Biden is a fact Person A should be able to cite the details of this fact and work with them. Instead A is seems to be displaying blind trust as bad as anyone on the USA political right/conservative spectrum that I’ve critisized before. And it’s causing behavior that’s at least useful in seeing how the problem is widespread so we can more easily target it. 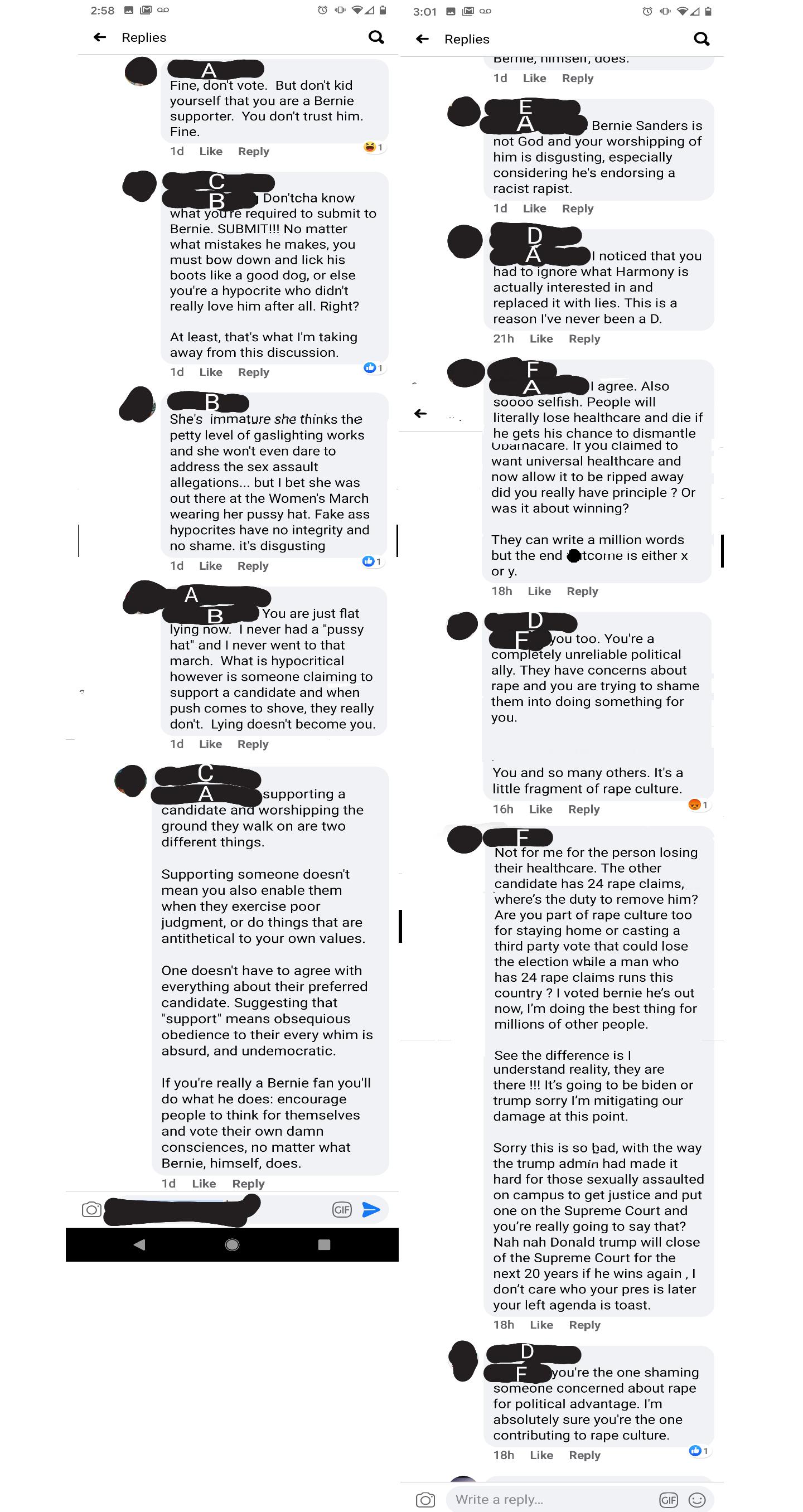 On the top left.
A: “Fine, don’t vote. But don’t kid yourself that you are a Bernie supporter. You don’t trust him. Fine.”
Aparently it’s impossible to add “…with a Biden endorsement.” To “You don’t trust him.” That would get closer to reality since my friend was concerned about Biden. But anything but complete unthinking support is unacceptable.

Farther down on the left.
A: You are just flat lying now. I never had a “pussy hat” and I never went to that march.”
Person A doesn’t seem to get the pussy hat reference, and accused my friend of lying instead of seeing the implicit accusation of false support for issues of concern for people with vaginas.
Or they see the reference and simply ignore it and accuse them of lying about them and the march to deal with the political threat. I can’t say which, and there could be other explanations, and it’s most useful to keep both possibilities in mind in such situations so you can let them show you.

There’s another interesting poster here too, Person F on the right.
“He” is Trump.
Person F:”I agree. Also soooo selfish. People will literally lose healthcare and die if he gets his chance to dismantle Obamacare.”

Selfishness is posturing such that you utterly avoid and neglect someone’s political concerns and replace them with your own concerns and shaming the person into voting your way.

Health care loss is the responsability of Trump and his supporters. If Persons A and F want political help the non-selfish thing is persuasion and finding mutually beneficial solutions, not shaming of concern for rape.

Person F:”If you claimed to want universal healthcare and now allow it to be ripped away did you really have principal? Or was it about winning.”

My friend is the principled one here because they won’t vote for someone they consider a rapist. Someone can dislike the principal but lying about it’s existance and portraying the opposite (Person F wants to win and doesn’t mention principles related to rape) is sickening dishonesty that shows me more evidence that my country is a broken mess reguardless of political party.

Person F:”They can write a million words but in the end the outcome is either x or y.”
Utter bullshit. The country could collapse from its collective ignorance, dishonesty, and incompetence. Sexual harassment and abuse can become a social focus and Trump and Biden can die from heart attacks while trying to out posture one another on the issue. The nation’s electors could be inundated with protestors pushing them to act independently from either party. I’m sure other people could come up with things. 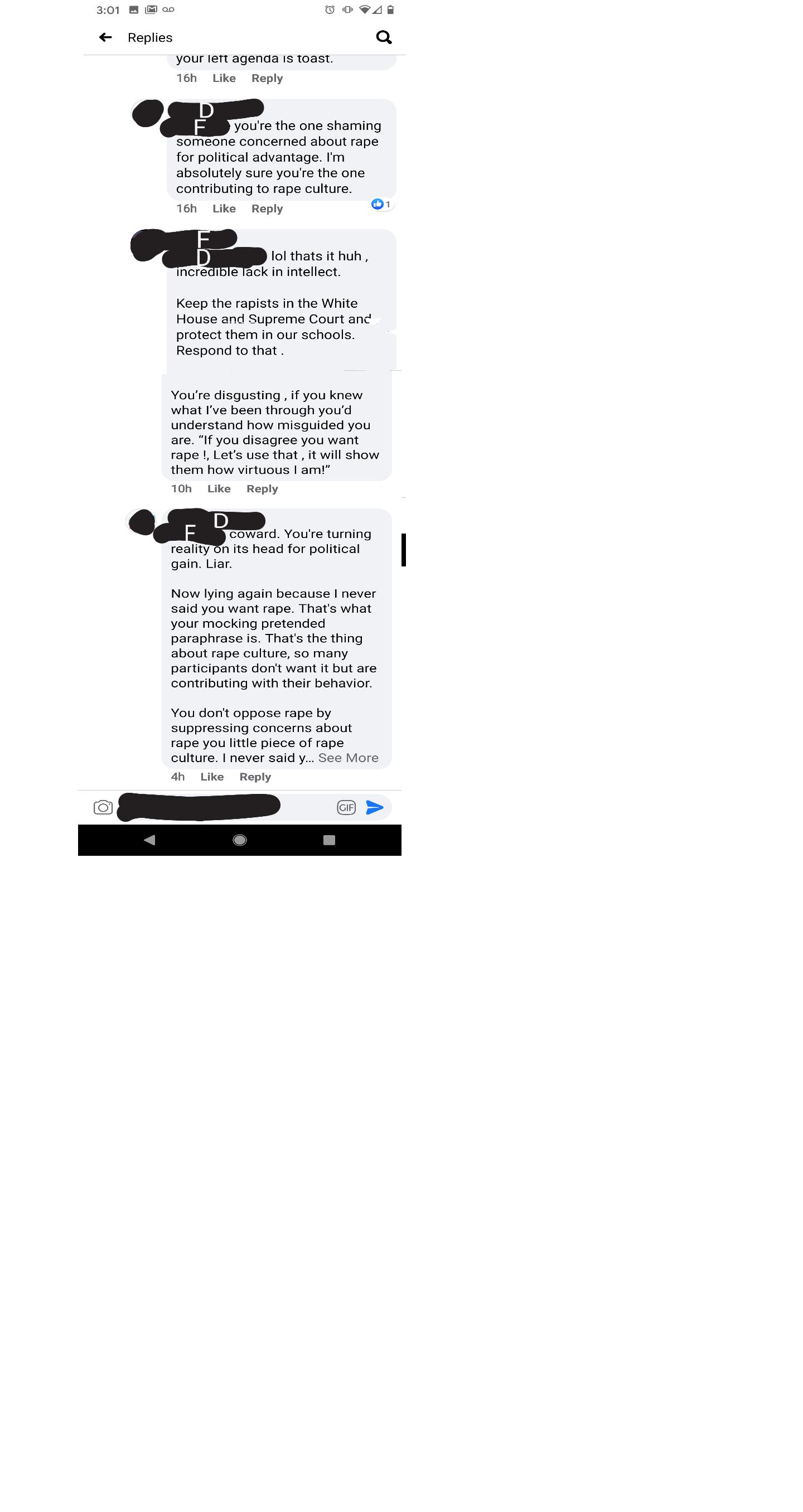