I was happy to see there are a lot of articles about the subject of stochastic terrorism when I did some looking. Here is one by Mhedi Hasan, After El Paso, We Can No Longer Ignore Trump’s Role in Inspiring Mass Shootings. The article defines it as,

“the use of mass communications to incite random actors to carry out violent or terrorist acts that are statistically predictable but individually unpredictable.”

Trump talks about his political enemies like they are violent threats in addition to the constant lying and other disparaging things. DARVO. The chants to lock people up without any respect for cited crimes or judicial processes are incitement.

Right after the kidnapping attempt on Michigan Governor Gretchen Whitmer we might have one on Wichita Mayor Brandon Whipple. Trump is the best worst example of things right now. In this case how irrational incompetent political leaders can inspire violent acts with broad disparaging language.

A feeling is a body sensation.
We feel while we do things, and we feel about things.

I often go to this paper when an opportunity to offer information about, or contrast a popular misconception of feeling and/or emotion comes up. Maps of Subjective Feelings. One specific figure is very useful. 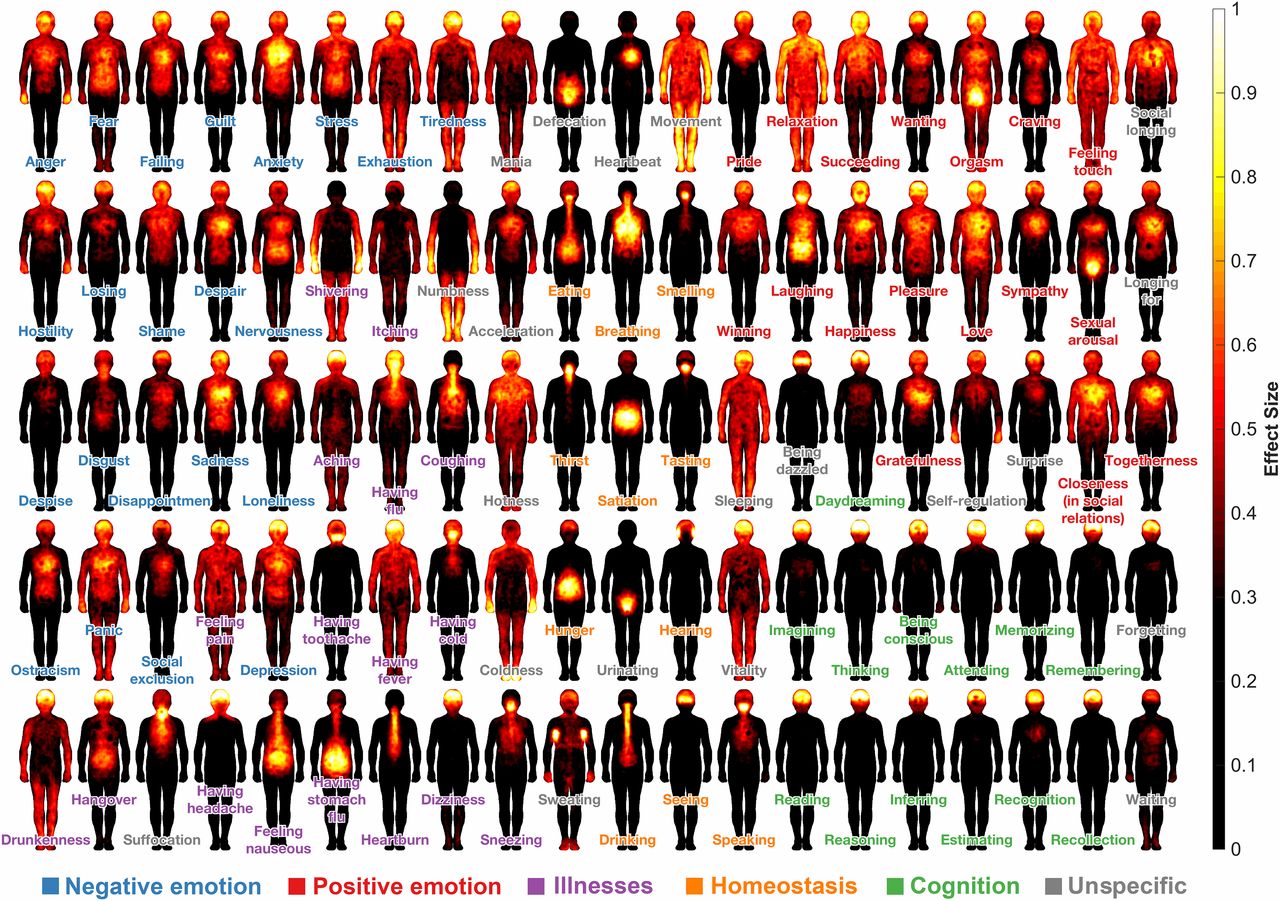 The image from the paper is a map of body feelings reported by a group of people while they were doing or experiencing 100 things. The colors indicate presence and intensity.

I’m going to discuss the categories out of order. I’m sure plenty of people will have criticism about the categorization of individual items or whole categories, I do too. But I want to emphasize the general embodied nature of feelings independent of our ability to categorize them.

Homeostasis is your feeling of of your body’s basic system status. Oxygen, hydration, nutrition…and lack thereof. Your meat computer has wiring for the status, location and integrity of it’s parts. A related part of the nervious system is the “enteroception”, or the parts that have to do with your ability to feel your body. Incoming sensory pathways for skin, meat, bone, organs…

Illness is your feeling of infection, injury, hangover…you feel the damage, chemical driven metabolic change, and reaction to microbial invasion of yourself.

Cognition is your feelings associated with mental tasks and experiencing it as an action. I can feel the increased blood flow in my head, often in specific locations.

Unknown, look for yourself and see what you think. I’m interested in a more general point.

These first four are feelings of yourself as an object. A running biological being of 44 segments if you go by nerve pairs. An apatite mounted tube of eukaryotes.

There is a lot of individual diversity here and things like mindfulness meditation focused on your body would have the effect of increasing the resolution of your feeling of yourself, and that component of emotion.

Emotion, both positive and negative emotion, is a more complex thing than the mere feeling of the body.

There is a relationship between feeling and emotion. Feeling is in the body, but emotion involves feeling about objects we see, hear (words are objects), touch and experience through “exteroception”, or the parts that have to do with your sensory organs that detect objects outside of yourself. Eyes, ears, skin…

The objects we store in our minds through exteroception are associated with the enteroception feelings we were having while we stored the memory of the object. That includes our bodies as objects making three important categories of feelings:

That’s how we store our sense of goodness or badness of something, or “valence” in brain science language. Exteroception gets bound to enteroception in memory which lets us have feelings about things.
We feel happy, sad, angry, or fearful about outside objects, other meat computers, ourselves.

There are many social attitudes and beliefs about feeling and emotion that are producing bad decisions all around us and that should be challenged to reduce irrational and illogical decision making.

As I learn about what we are and how we work I see consequences to it. Some of those consequences affect many common uses of the words feeling and emotion that aren’t consistent with reality and have political dimensions.

This seems presented as a bad general category like the person is wrong because they have emotions, usually negative ones. I don’t see people disparaging emotion this way talk about what the feelings in the emotions are attached to. Quotes about the objects the feelings are attached to for example.

The reality is that we are always emotional.

The reverse problem is that there is no such thing as “unemotional”. At what time is a person cut off of past enteroception associated with object memory? You don’t stop feeling good and bad about the objects stored in memory.

This is considered a bad thing but all arguments are emotional. I think this is about avoiding what people feel emotional about.

No, “enteroception feels are connected to exteroceptive reals through memory”.

General portrayals of emotions and feelings as bad things not only don’t make sense, they are certainly harmful when it comes to understanding and control of yourself as a meat computer, a biological being that binds feeling to objects in memory. I want control all of my feelings as information and tools. This goes for blanket complaints of people feeling offended too.

It gets complicated with things like hate, I’ll admit that up front. But we don’t choose the hate. The hate is bound into the memory. It’s a natural response so I’m more interested in what to do with the hate, fear, disgust, as well as the positive emotions and their associated feelings.

A better understanding of how we function when it comes to feeling and emotion is useful on a personal and a social level. In my experience it’s useful when it comes to politically aggressive people because you can redirect to the feelings they are reacting to, and often obfuscating and disparaging about.

It seems simplistic but asking or demanding to see what a bigots feelings are attached to also makes the job of demonstrating the bigotry easier. I like to practice interrogating bigoted disparaging claims. It’s irrational. It’s going to run into an error.

I welcome other observations because this is a social challenge with many pieces and I have one perspective.