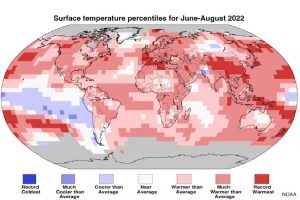 We all have lots to worry about already, with pandemics and climate change and political crises and growing irrationality, but one I’m increasingly alarmed by is the popularity of these pseudo-intellectual frauds parading about as “longtermists” or “effective altruists” who believe we should be worshipping potential future generations rather than dealing with real people in the here and now. It leads to distorted priorities. It doesn’t help that their thought-leaders are cocky ignoramuses. Émile P. Torres writes about William MacAskill’s opinion of the importance of climate change.

One finds the same insouciant attitude about climate change in MacAskill’s recent book. For example, he notes that there is a lot of uncertainty about the impacts of extreme warming of 7 to 10 degrees Celsius but says “it’s hard to see how even this could lead directly to civilisational collapse.” MacAskill argues that although “climatic instability is generally bad for agriculture,” his “best guess” is that “even with fifteen degrees of warming, the heat would not pass lethal limits for crops in most regions,” and global agriculture would survive.

I am not a climate scientist, but I know a number of them, and follow the work, and that statement is jaw-droppingly idiotic. Even with the amount of warming we’ve got now, we’ve had heat waves that kill large numbers of people, and this past year has seen a series of extreme weather disasters.

Record-breaking heat waves baked India and Pakistan, then monsoon flooding left about a third of Pakistan under water, affecting an estimated 33 million people. Temperatures exceeded 104 degrees Fahrenheit (40 Celsius) for prolonged periods in many places, and even broke 122 F (50 C) in Jacobabad, Pakistan, in May.

The Asian heat helped to melt some glaciers in the Himalayas, elevating rivers. At the same time, three times the normal annual rain fell in Pakistan during the weekslong monsoon. More than 1,500 people died in the flooding, an estimated 1.8 million homes were damaged or destroyed, and hundreds of thousands of livestock were lost. Food for the coming seasons will be in short supply.

Extreme heat in Europe led to wildfires, especially in Spain and Portugal. The drought in Spain dried up a reservoir, revealing the long-submerged “Spanish Stonehenge,” an ancient circle of megalithic stones believed to date back to around 5000 B.C. Electricity generation in France plummeted, with low rivers reducing the ability to cool nuclear power towers, and German barges had difficulty finding enough water to navigate the Rhine River.

That’s just this year! And the trend is ever upwards! Keep in mind that when climate experts tell you they’re concerned about a 3 degree rise, they’re looking at the mean temperature…and the extremes will be far worse. It’s the extremes that kill people and devastate regions, not the mean.

But don’t listen to me. Torres contacted real climatologists about that claim.

For example, I shared the section about global agriculture with Timothy Lenton, who directs the Global Systems Institute and is Chair in Climate Change and Earth System Science at the University of Exeter. Lenton told me that MacAskill’s assertion about 15 degrees of warming is “complete nonsense—we already show that in a 3-degree-warmer world there are major challenges of moving niches for human habitability and agriculture.”

Similarly, Luke Kemp, a research associate at the University of Cambridge’s Centre for the Study of Existential Risk who recently co-authored an article with Lenton on catastrophic climate change and is an expert on civilizational collapse, told me that “a temperature rise of 10 degrees would be a mass extinction event in the long term. It would be geologically unprecedented in speed. It would mean billions of people facing sustained lethal heat conditions, the likely displacement of billions, the Antarctic becoming virtually ice-free, surges in disease, and a plethora of cascading impacts. Confidently asserting that this would not result in collapse because agriculture is still possible in some parts of the world is silly and simplistic.”

If we’re really worried about existential risk and the possible extinction of the human species, I say we need to tar and feather these longtermist fantasists and launch them on a rail to the moon. It looks like delusional crackpots are going to kill us all.

Well, that explains a lot about that shooter » « Keep talking, Herschel Walker