I got this question in email. Oh god.

I was wondering if you are, or were willing to comment on Matt Walsh’s movie, ‘What is a Woman?’?

While I did see your post on the question being asked to Ketanji Brown Jackson, I did find your response a little unsatisfying. Yes, coming up with an inclusive, biology specific definition is problematic; but Matt and others are just asking for a basic dictionary or functional definition. If you can define a cat, as for example, a member of the Family Felidae, or a carnivorous mammal with retractible claws, or a common family pet that purrs, then you should be able to provide a definition of a woman.

Most of the people asked in Matt’s movie either refuse to provide a definition, or give a circular definition. This is problematic in a couple of ways. Words have meaning. If you are unwilling, or unable, to provide a definition of a word that you use, then that word is meaningless. If you can define what cat, dog, or bird means, but can’t, or won’t, define man or woman, then there is a problem. If you are unwilling to define what a woman is because you are worried about the personal consequences of doing that publicly, such as public backlash, losing your job, etc. then you have a perfect example of cancel culture.

No, I didn’t see that movie, nor will I be seeing it in the future. It’s a stupid gotcha question.

You know, not everything fits into a tidy category that can be encapsulated in a brief dictionary entry. This bizarre need to make everything sharp-edged, black-and-white, rigidly and scrupulous defined is a you problem, not a me problem. I’m fine with ambiguity and complexity, and “woman” is an extremely complex category. If you’re going to complain about circular definitions, the Merriam-Webster definition fits the bill: “an adult female person”. Sure, go with that. “Adult” is ill-defined, “person” is the subject of many arguments, and “female”…well, here’s another dictionary definition: “of, relating to, or being the sex that typically has the capacity to bear young or produce eggs”. “Typically,” huh. So not necessarily? Or how about this alternative, “having a gender identity that is the opposite of male”? That implies a simple binary, which is false, and worse, suggests males and females are opposites of each other, rather than positions on a continuum.

You want a nice clean dictionary definition? Sorry, guy, that’s just a whole ‘nother ball of worms. The desire for a reductive simplification is a fallacious goal that is just going to fuck you up. It is not “cancel culture” if people give you the side-eye and think you’re an ass if you provide a simple-minded definition that excludes a large number of women who know they are women, who have a history of womanhood, who interact with society as women, who present as women, who live as women, because you want an inadequate 5 word definition that makes you feel like you’ve mastered the concept of “woman” while not actually understanding anything. That approach always leads to slotting all women into a narrow restrictive box that makes no one happy or satisfied. It also damages men, because then, since we’re “opposites”, we’re expected to shun anything that might overlap with femininity.

Here’s something else that’s problematic: that you think a theocratic fascist like Matt Walsh is making a good point by insisting that everyone must provide a narrow range of criteria for womanhood. Nope, not going to do it. I’ve met many women, and they are diverse. They’re not Barbie dolls, mass produced for your pleasure. Stop trying to find a single mold to define them, and accept them as people. If you face public backlash because they reject your expectations of how a woman should be, that’s not “cancel culture”. That’s just someone recognizing you are an asshole. And if lots of people think the same way, consider the possibility that it’s not their failure to define a word to meet your simplistic views, it’s that maybe you are an asshole.

You know who else liked Walsh’s awful movie? JK Rowling. 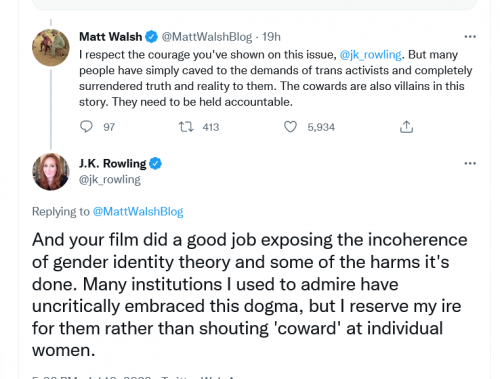 If you find yourself agreeing with either Walsh or Rowling, you’ve accepted a conservative view that dehumanizes women, reducing them to a cartoon.

Also, please don’t try to pretend the authority of biology supports your expectation of sharp, precise boundaries to everything. Biologists know that biology is fuzzy about everything.