Here’s what it’s like to live here when reproductive rights are being stripped everywhere around us: the governor sent out a bulk email.

Without Roe v. Wade as a safeguard, Minnesota could soon become the only state in the upper Midwest with safe and legal access to abortion.

We are a safe haven for reproductive freedom, and as long as I’m governor, it will stay that way. That’s why today, I signed an Executive Order to further protect people who get or provide legal abortions in Minnesota from possible legal repercussions in other states.

Lt. Governor Flanagan and I have been clear: We will not allow Donald Trump’s 6-3 conservative Supreme Court majority to set back our rights here in Minnesota.

Our Republican anti-choice extremist opponents, on the other hand, have pledged to ban abortion outright, with no exceptions even for rape or incest, the first chance they get.

That’s pretty good, and it’s true that the Republicans in this state are yowling about needing to prove they’re good ‘Muricans by imposing even more cruel and burdensome restrictions. It was marred, however, by the usual ‘give me money’ close. Sorry, you can ask for my vote, but not for donations. There are people who need them more. Like the Red River Women’s Clinic.

The only abortion clinic in North Dakota is now preparing to move across state lines following the recent Supreme Court ruling on Roe v. Wade.

Red River Women’s Clinic, located in Fargo, has been the only provider in the state for 20 years.
They now await closure, which will leave many women in the state without care.
Clinic Director Tammi Kromenaker told CNN Saturday they are still open, for now. “The plan is to provide service as long as we legally can,” Kromenaker said.

Fargo, if you don’t know your midwestern geography, is on the far eastern side of the state, right on the border with Minnesota, and Moorhead is a short hop across the river, so this is a relatively easy move. It’s still inconvenient and expensive. I’d rather donate to the clinic than to Democrats.

Unfortunately, as easy as it is to move, these assholes can also easily drive for 15 minutes to torment women. Sickos. 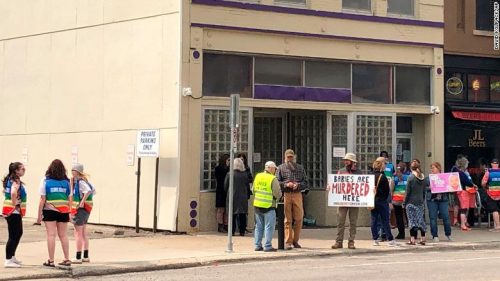 The people in the blue vests are heroes, clinic escorts. The people with the obnoxious signs are scum. I notice that the scum are allowed to cluster right around the entrance for maximum viciousness. Maybe the Minnesota Democrats could get their act together to pass a law setting much larger restrictions on how close harassers can get to a women’s health clinic? Maybe then they could ask me for a few bucks.