Everything she touches turns to poison. If you’ve never heard of her, she’s a notorious Minnesota hate-monger, a nasty, more bitter version of Michele Bachmann. She’s the master hater behind the Minnesota Child Protection League, one of those misleadingly-named right-wing organizations that swoops into schools to protect the kids from bullying, which usually translates into defending the bullies right to torment LGBT kids. She’s simply an awful person.

MCPL’s lead spokesperson is Barb Anderson, a ubiquitous figure in the school bullying debate. Anderson has long volunteered as a researcher for the Minnesota Family Council, which led two failed battles against marriage equality. She was also a vocal opponent of LGBT safety in the Anoka-Hennepin School District where she helped launch the Parents Action League. PAL is listed as a hate group by the Southern Poverty Law Center because of its adamant demands to have the ex-gay movement in the Anoka-Hennepin School District.

Anderson has made some extreme statements about LGBT people, so much so that GLAAD has added her to its Commentator Accountability Project.

For example, she once said, “The greatest threat to our freedom and the health and well-being of our children is from this radical homosexual agenda that is just so pervasive.”

She was bad news several years ago, when a wave of suicides was sweeping through the Anoka-Hennepin school district — nine kids dead by their own hand in a couple of years. It was horrific. The school district was highlighted in a Rolling Stone (Massive trigger warning: that article recounts the personal experiences of many young people who were viciously bullied, and graphically describes several suicides).

There was another common thread: Four of the nine dead were either gay or perceived as such by other kids, and were reportedly bullied. The tragedies come at a national moment when bullying is on everyone’s lips, and a devastating number of gay teens across the country are in the news for killing themselves. Suicide rates among gay and lesbian kids are frighteningly high, with attempt rates four times that of their straight counterparts; studies show that one-third of all gay youth have attempted suicide at some point (versus 13 percent of hetero kids), and that internalized homophobia contributes to suicide risk.

Administrators denied that there was a problem with gay kids being bullied. They want to stop all bullying, which is a common defense for avoiding conflict with special interest groups targeting LGBT rights. They can’t possibly single out LGBT kids for protection, despite the fact that they’re getting bullied because they’re LGBT. They won’t even acknowledge that the behavior of these kids is perfectly normal, so they avoid useful approaches, like inclusive sex education. No, they just close their eyes to the issues, because they’d rather offend families of the bullied kids than the MCPL. They’ll even go so far as to blame “gay activists” for the problems.

The Southern Poverty Law Center and the National Center for Lesbian Rights have filed a lawsuit on behalf of five students, alleging the school district’s policies on gays are not only discriminatory, but also foster an environment of unchecked anti-gay bullying. The Department of Justice has begun a civil rights investigation as well. The Anoka-Hennepin school district declined to comment on any specific incidences but denies any discrimination, maintaining that its broad anti-bullying policy is meant to protect all students. “We are not a homophobic district, and to be vilified for this is very frustrating,” says superintendent Dennis Carlson, who blames right-wingers and gay activists for choosing the area as a battleground, describing the district as the victim in this fracas. “People are using kids as pawns in this political debate,” he says. “I find that abhorrent.”

That is explicitly Barb Anderson’s approach. If LGBT kids are being bullied and committing suicide, that’s the fault of the kids themselves and of schools that permissively tolerate the pied piper of perversion and that GSAs [Gay-Straight Alliances] will draw more confused and questioning youth into gay experimentation which will lead schools to affirm sexual disorders, which is why all those kids killed themselves.

Anti-gay backlash was instant. Minnesota Family Council president Tom Prichard blogged that Justin’s suicide could only be blamed upon one thing: his gayness. “Youth who embrace homosexuality are at greater risk [of suicide], because they’ve embraced an unhealthy sexual identity and lifestyle,” Prichard wrote. Anoka-Hennepin conservatives formally organized into the Parents Action League, declaring opposition to the “radical homosexual” agenda in schools. Its stated goals, advertised on its website, included promoting Day of Truth, providing resources for students “seeking to leave the homosexual lifestyle,” supporting the neutrality policy and targeting “pro-gay activist teachers who fail to abide by district policies.”

Asked on a radio program whether the anti-gay agenda of her ilk bore any responsibility for the bullying and suicides, Barb Anderson, co-author of the original “No Homo Promo,” held fast to her principles, blaming pro-gay groups for the tragedies. She explained that such “child corruption” agencies allow “quote-unquote gay kids” to wrongly feel legitimized. “And then these kids are locked into a lifestyle with their choices limited, and many times this can be disastrous to them as they get into the behavior which leads to disease and death,” Anderson said. She added that if LGBT kids weren’t encouraged to come out of the closet in the first place, they wouldn’t be in a position to be bullied.

It’s deja vu all over again. The Anoka-Hennepin catastrophe, fomented by Barb Anderson and her cronies, was nine years ago. So she pulled up stakes and moved to another school district to dispense her venom. The latest episode? The Becker school district invited the MCPL and Barb Anderson to present an alternative view point at a meeting of the school board.

That’s right. The fools running the Becker school district invited a known hate group to speak to the board about adopting their hateful policies. So they did.

The school board invited the Child Protection League to speak at a special meeting following outrage from some community members when OutFront Minnesota — an organization supporting lesbian, gay, bisexual and transgender rights — presented at an August meeting.

The Child Protection League describes itself as an organization committed to protecting children from exploitation and indoctrination. Barb Anderson helped form the group, along with the Parents Action League, which was designated as a hate group by the Southern Poverty Law Center for its anti-gay rhetoric and involvement in the Anoka-Hennepin School District when it saw a rash of suicides and a lawsuit claiming the district didn’t respond to harassment on the basis of sexual orientation.

Anderson was not at Monday’s meeting but Child Protection League Board Chair Julie Quist spoke about children’s books she said violated the beliefs and norms of the community by accepting different gender identities. Quist previously served as district director for U.S. Rep. Michele Bachmann. Also speaking were former Becker board members Betsy Armstrong and Chris Klippen.

Armstrong spoke for about 50 minutes and was interrupted several times by protesters — mostly Becker students — questioning her statements or chanting “gay rights are human rights.”

She spoke mostly about what she called the “worrisome” increase in the number of transgender youth in the last decade and cited possible reasons as anxiety, autism or sexual trauma exacerbated by peer and social media influences — something Armstrong called a “social contagion.”

Armstrong also referenced a Bible quote that says God created two sexes — male and female — and said people who follow religious teachings are constitutionally protected and their opinions ought to be given equal consideration.

Notice one aspect of their tactics: emphasizing trans kids. Focusing on gay kids, while still something they do, has had diminishing returns as homosexuality is gradually, increasingly acceptable. Trans kids are fair game! Let’s pick on them until the community wakes up to the fact that this all the same horrendous game of finding someone to ostracize and abuse.

The kids are all right, though. They showed up to protest, and were a lot more intelligent than the sick grownups who brought on this spectacle.

Hundreds of students, parents, and residents in the Becker, Minnesota School District showed up, mostly to protest, a special presentation by an anti-LGBTQ group that offered what it called an “alternative viewpoint” on transgender people. The group, the Minnesota Child Protection League, has been cited by the Southern Poverty Law Center.

“This is disgusting,” said Skyler Seiler, identified by Fox9 as a transgender student at the school. “I can’t believe this, we are humans too. I don’t know why they’re treating us like we’re not. Is it not your job, as school board members, to make students feel safe and welcome?”

The school board on Monday voted to allow the group, which Fox9 says is listed by the Southern Poverty Law Center as an anti-LGBTQ hate group, to deliver the special presentation. It’s unclear why the school board agreed to allow a third party organization to deliver a message of hate and discrimination that directly affects the students and families it is supposed to support, protect, and defend. It’s also unclear if that information was vetted or fact-checked before being delivered. Attendees say the group’s information was not from credible sources.

“Human rights don’t have two sides so bringing in another side just doesn’t make sense to me,” Heather Abrahamson told Fox9.

“They were not credible sources that they were citing, and it was completely biased and really offensive and insulting,” Maggie Seiler said. “This is painful, I’m sure those kids in there feel even more ostracized and like the school doesn’t back them and like they have even less rights.”

Those kids would be right. It was school board members who brought in the hate-mongers and who argued that “free speech” trumps the kids’ right to learn in a safe environment. They don’t care about the students, prioritizing the horrid discriminatory religious beliefs of people like Barb Anderson over the experiences of people who have to live with the discrimination.

Look, people, you probably don’t like the optics of citizens turning out en masse to call you a bigot. There’s a solution: never ever pay attention to hate groups like the MCPL or the Parents Action League or the Minnesota Family Council. Don’t invite them to your meetings. Burn their recommendations. Drive them out. Or get more of this from the families you claim to support. 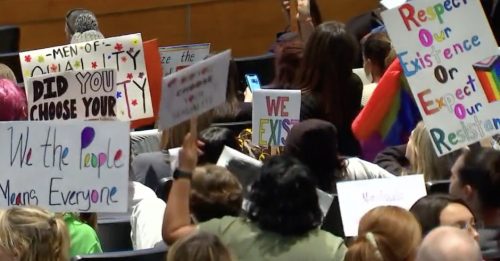 Some celebration » « Now here’s a political nightmare for you