Families have struggled for the last few years with pandemic issues, and you’d think everyone would by now realize how important schools are to both parents and kids. We should be in agreement that we should provide more support to public schools and their staff, and not be trying to cheap out on an obviously indispensable service. That’s what we’ve been trying to do, though, and now it’s going to bite some communities in the butt. Teachers in Minneapolis went on strike yesterday. 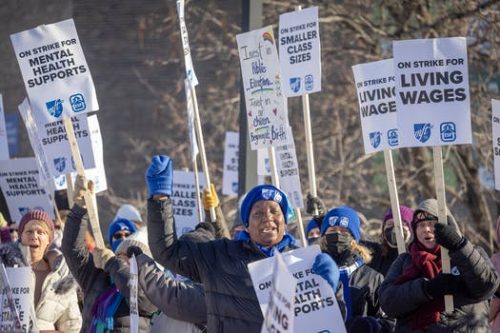 Their demands are reasonable. They primarily seem to be about giving support staff a living wage.

The union wants Minneapolis Public Schools to raise the starting salary for educational support professionals from about $24,000 to $35,000. More than 1,500 educational support professionals work for the district, according to the Minneapolis Federation of Teachers. They help with transportation, language translation, one-on-one assistance for kids with special needs, and before- and after-school programs, among other things.

Union leaders are also seeking class-size caps, increased mental health support and “competitive salaries” for teachers, noting that their compensation lags many districts in the Twin Cities metro area. The average salary for Minneapolis Public Schools teachers is about $71,500, according to state data.

Let’s be fair and look at the other side’s situation.

At a news conference Tuesday afternoon, Minneapolis Superintendent Ed Graff said proposals from the union and district are “still very far apart.” The total cost of the union’s current proposals is “an additional $166 million annually above what we’ve already budgeted for,” he said.

I can believe that they did not budget adequate funds for the work they expected to be done, but that is not an excuse! That is a management problem, not a worker problem. When we had a contractor do some work on our house a few years ago, we did not have the option to tell him after he was done that “you did $10,000 worth of work, but we only budgeted $5,000 for the job”. That’s not how any of this works. It is the teacher’s job to teach, it is management’s job to fund the work they expect to be done.

I do have some sympathy for the school superintendent. It’s not easy to get support for schools because we’re coping with a 19th century solution to funding schools (property taxes) that promotes inequality and makes life most difficult for the poorest districts. However, the solution is to change the system, not to gouge cash out of the lowest-ranked workers.