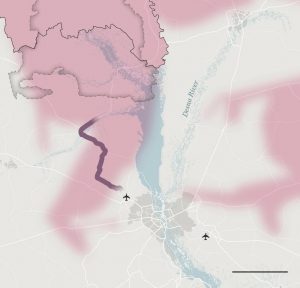 The Russian convoy in Ukraine is fascinatingly horrifying. It just goes on and on, miles and miles of trucks slowly approaching their target, completely obvious to the satellites watching from above. I guess this is modern war, mostly the long tail of the supply chain delivering food, fuel, and ammo to the deadly beast at the head.

The question is…how effective is the cutting edge at the head? How vulnerable are the logistics of that supply chain? I don’t know. We’ll find out in the next few weeks, I suppose, at the expense of all the Ukrainian civilians fleeing.

Fuel trucks are exactly the sort of “soft targets” that the Ukrainians should be aiming to attack as they attempt to undermine the more sizable and powerful Russian army’s ability to fight, according to Rep. Jason Crow (D-Colo.), an Army veteran who fought in Afghanistan and Iraq and visited Ukraine in recent weeks.

“You don’t hit the combat units. You don’t hit the tanks. You hit the fuel trucks, the ammunition trucks,” Crow said. “You cut off their supplies, and you also try to strike terror into the minds of the enemy.”

The sight of the stretch of Russian vehicles appears to be helping bolster public opinion toward providing more military aid. Government officials, once reluctant to escalate involvement in the conflict, are now talking about providing aircraft and additional munitions to help Ukraine resist the ongoing invasion.

“I call that 40-mile convoy, by the way, the biggest, fattest target in Ukraine,” retired Navy admiral James Stavridis, who previously led NATO forces as the supreme allied commander Europe, said on MSNBC. Put certain fighter jets “in the hands of the Ukrainians,” he added, “and watch that thing blow up.”

Please don’t. I want the war to end, but escalation won’t end it, it’ll set the whole region on fire. I don’t pretend to understand Russian tactics at all, but dangling that big, fat target out there, inviting the US and NATO to blow it up, might be one of Putin’s escape routes. It’s not his fault that his army is bogged down and his soldiers are getting killed, it’s the evil imperialist West ganging up on holy mother Russia, we must redouble our efforts and marshal all of our patriots to fight on…and keep Putin in power.

As it stands, what I’m seeing is overwhelming force being steadily applied with increasing intensity to pressure the Ukrainians into surrender. This isn’t a blitzkrieg, it’s Russia doing what has always worked for them: pouring raw manpower and resources into the conflict, burying the enemy without finesse. They might not be stoppable by Ukraine, although they will bleed the Russians badly. It’s a horror show on both sides. So let’s not ramp it up.

Send the Ukrainians the matériel they need to hold out and fight back themselves, but please no, don’t engage the Russians directly. That’s how this turns into WWIII.

I say that even while I’m hoping Ukraine wins and the Russian army has to retreat back home.

Another thing I don’t understand. If Putin is “denazifying” Ukraine, and hopes to bring the nation back into the embrace of the Russian empire, why is he bombing civilians who are running away? Why put land mines in the “humanitarian corridors” that are intended to allow civilians to evacuate? He’s sowing the seeds of a prolonged rebellion, even if his gigantic convoy manages to secure the capitol.

I support the Minneapolis teachers’ strike » « My birthday is tomorrow