I shouldn’t have even started drilling down to the source. I started at Answers in Genesis, a mistake I know, but at least the ridiculed (for the wrong reasons) the next article in the chain, which was in The Daily Mail. Here’s the Daily Mail headline:

Hey, how about if you demonstrate the existence of intelligent space-faring aliens before you start speculating about their motivations? But they’ve got a scientist who’s doing the speculating, and the Daily Mail loves scientists who agree with their biases.

Sci-fi films and TV shows have routinely depicted a brutal race of aliens visiting Earth in their spaceships and enslaving unfortunate Earthlings.

But according to one expert, extraterrestrial life may actually be too scared of ‘dangerous’ and ‘violent’ humans to want to come here.

Dr Gordon Gallup, a biopsychologist at the University of Albany, argues that humans are ‘dangerous, violent and ceaselessly engage in endless bloody conflicts and war’.

How do you become an expert in alien biopsychology, I’d like to know. We’re about to bottom out, though, since we’re about to learn where he published these claims.

Dr Gallup has presented his argument in an open access paper published in the Journal of Astrobiology this month.

Oh god. AiG, the Daily Mail, and the Journal of Astrobiology? Is this Dumpster Diving Friday or something? Have mercy. Here’s the abstract for the paper.

We evaluate claims for extraterrestrial intelligence based on the logic behind assertions such as the absence of evidence is not evidence of absence. To assess intelligence elsewhere in the universe we outline two of the principle scientific claims for intelligence on Earth. One involves the idea that intelligence involves working out the reasons for our own existence. The other involves self-awareness and the capacity to make inferences about what others know, want, or intend to do. The famous quote from Rene Descartes “I think; therefore, I am” needs to be revised to read “I am; therefore, I think.” Some of the conclusions we derive about intelligence include the idea that most species on planet Earth have clever brains but blank minds (no self-consciousness); humans are the only species where what you know could get you killed; if humans become extinct it is highly unlikely that human-like intelligence will re-emerge on this planet and the odds of human-like intelligence evolving on other worlds is infinitely small. However, if intelligence exists elsewhere in the universe it may not have revealed itself because humans are dangerous and are perceived as posing too great a risk.

I’d reject it out of hand for the blatant human exceptionalism and the false claims right there: most species on planet Earth have clever brains but blank minds (no self-consciousness). Most species on Earth don’t have brains, for one, but additionally, have you met my cat? Not very clever, but definitely full of herself and quite aware of herself. There are a lot of claims in this abstract that the author does not adequately justify in the remainder of the opinion piece (it is not a scientific paper).

Then, in the first paragraph of the introduction, he cites Rhawn Joseph three times. Ugh. He’s an affiliate member of the Panspermia Mafia, I think we’re done.

I couldn’t help myself. I took a quick look in the table of contents to see what ol’ Rhawn was up to now. He’s still poring over NASA’s Mars photos, drawing circles and arrows on them, to claim now that there are tube worms and crustaceans on Mars. 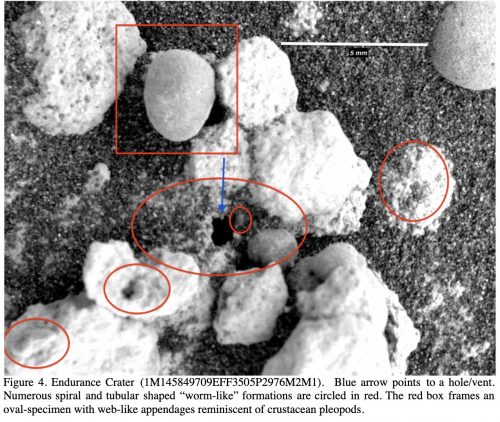 At least he’s got the Daily Mail and Answers in Genesis to continue pretending he has any credibility at all left!