Among the many things Ted Cruz would like everyone to forget is this tweet from this fall: 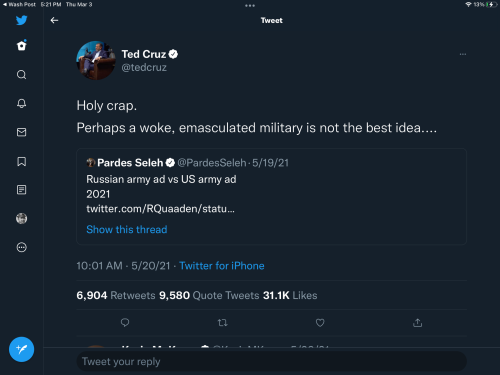 Right-wing media were orgasming over a Russian army recruitment ad which portrayed Russian soldiers as these manly masculine macho dudes, and were contrasting that with the tolerant, diverse American army. The word “woke” got thrown around a lot, in a disparaging way. A lot of Republicans weren’t embarrassed to show off their authoritarian views at that time.

Unfortunately, nothing has really changed. Now Ted Cruz is simultaneously saying we need to get tough on Russia, and blaming the Ukraine war on Biden.

A truly Russian-style government would have Cruz arrested instantly for criticizing the Maximum Leader. I don’t think he (and I) want to replicate Russian militarism.