I still remember the eruption of Mt St Helens vividly. I was living in Eugene, Oregon at the time, where we mainly experienced it as annoying chronic ash falls, but I was recently married and my wife’s family all lived in Longview and Vader, towns not far from the volcano. We got in a little volcano tourism that summer.

It was catastrophic, but also an opportunity. Researchers have been thoroughly studying that area ever since, documenting how nature recovers. You can still see the scars, but it’s impressive how much the landscape has bounced back. 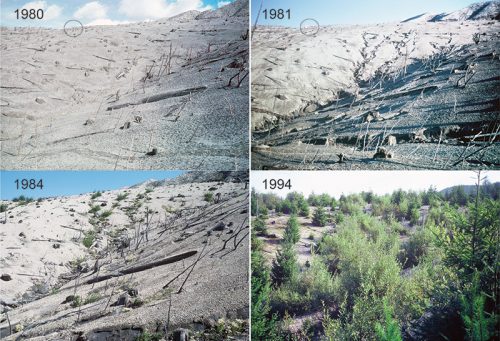 Sequence of images showing geomorphic and vegetation change at a site in upper Smith Creek valley that received 50 centimeters of blast PDC and tephra fall deposits. Vegetation initially sprouted from surviving rootstocks in pre-eruption soils that, after the eruption, were re-exposed in the floors of gullies eroded through the new deposits. By 1994, trees were established on the hillside between the gullies and both surviving and colonizing species anchor the sediments. Helicopter circled for scale in the top two images. Credit: F. J. Swanson, U.S. Forest Service

We should pay a call on the area again sometime. Unfortunately, my in-laws have either died or moved away now, so sometimes nature can get better, but on a small scale, it can get worse.

Every time. Jesus, this pandemic will never end. » « Battling letters!