After TheCrafsMan lifted your mood (I hope), now it’s time to come crashing down. The name of the young woman murdered by the cops has been released to the public. 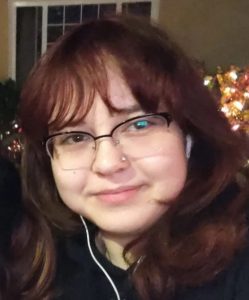 Her name was Valentina Orellana-Peralta. She was 14 years old, shopping for her quinceañera dress. She was hoping to be an engineer someday.

The linked article also includes a video of the asshole cop in action, which I won’t be including here. The cop rushes in to the store eagerly with his rifle, turns a corner, sees the guy we assume had been attacking people with a bike lock, and pop-pop-pop instantly opens fire. The cops did not take any time to deliberate, to argue, to try to settle the problem relatively peacefully, and there was a whole mob of cops idling around the store who could have easily taken the alleged attacker down by physically jumping on him, or hitting him with their nightsticks. But no, that guy was marked for death from the instant the trigger-happy cop lifted his big gun out of his car.

Lots of people are noticing that.

Many critics of the police have expressed outrage over aspects of the shooting — the speed with which an officer opened fire on Mr. Elena Lopez although he did not have a gun, the fact that police officers did not ensure that the area was clear of bystanders.

“You guys don’t have the ability to just tackle him to the floor?” said Chloe Cheyenne Rogers, an activist who started the Justice for Valentina petition, which has nearly 5,000 signatures. “You can’t use any parts of your training to be able to take that person in a way that doesn’t include your assault rifle?”

The LA PD North Hollywood (@lapdnorthhwddiv) has now deleted their Twitter account. The police chief is calling it “a chaotic incident”. The ass-covering has begun.