Jesus christ. Have some dignity and get off your knees and report this to the teacher’s union — and if you don’t have one, make one. This is abuse, plain and simple. It’s also insulting, forcing teachers to scrabble for what, a few hundred dollars? And why are the spectators cheering, this is degrading the people they expect to teach their children?

This is a fucked up country, and South Dakota is one of the worst.

Furthermore, this humiliating cash donation was sponsored by a mortgage company.

In South Dakota, “local teachers scrambled for $5,000 worth of cash during the Sioux Falls Stampede hockey game on Saturday night,” Annie Todd reported Sunday in the Sioux Falls Argus Leader. Ten local teachers participated in the first ever Dash for Cash, trying to grab as many dollar bills as they could in less than five minutes. The money, donated by CU Mortgage Direct, is meant to go toward a participating teacher’s classroom or school.

“With everything that has gone on for the last couple of years with teachers and everything, we thought it was an awesome group thing to do for the teachers,” CU Mortgage Direct’s Ryan Knudson told the Argus Leader. “The teachers in this area, and any teacher, they deserve whatever the heck they get.”

They “deserve whatever the heck they get”, which is why the mortgage company created an embarrassing spectacle in which teachers were forced to get down on their knees and scrape for dollar bills. Fuck CU Mortgage Direct.

This gets worse. The audience had to pay $15 to attend this circus, and only $5 of the admission went to the schools. Where did the rest of the money go? Was this a for-profit event to benefit CU Mortgage Direct? Were people willing to pay 3 times as much money to a mortgage company rather than pay 1/3 as much directly to teachers? 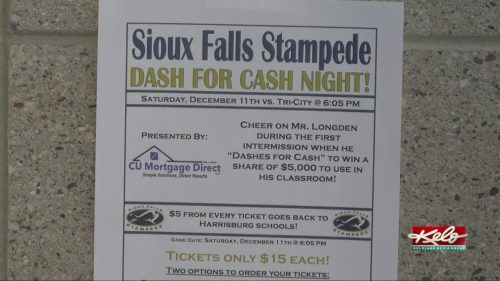 More signs we live in a dystopia » « Anne Rice is dead