If you’re a sick, warped pedophile, that is.The news is not good this morning.

Did you know that if you work for the CIA, or are even a contractor doing work for the CIA, that “the agency resists prosecution of its staff for fear the cases will reveal state secrets”? So you can get away with all kinds of evil acts if you work there (which, I guess, shouldn’t be at all surprising, given that it is the CIA).

Over the past 14 years, the Central Intelligence Agency has secretly amassed credible evidence that at least 10 of its employees and contractors committed sexual crimes involving children.

Though most of these cases were referred to US attorneys for prosecution, only one of the individuals was ever charged with a crime. Prosecutors sent the rest of the cases back to the CIA to handle internally, meaning few faced any consequences beyond the possible loss of their jobs and security clearances. That marks a striking deviation from how sex crimes involving children have been handled at other federal agencies such as the Department of Homeland Security and the Drug Enforcement Administration. CIA insiders say the agency resists prosecution of its staff for fear the cases will reveal state secrets. 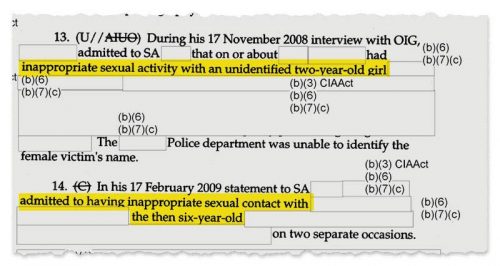 It’s all rather horrifying, especially given that these secret agencies have been blacklisting homosexuals for decades and acting aghast at the very idea of a gay person acquiring a sensitive position. They might be blackmailed, don’t you know. But pedophiles…just a slap on the wrist and a dismissal.

Speaking of pedophiles, there’s new news about dead child rapist Jeffrey Epstein. New records, flight logs, have been unearthed that reveal hundreds of additional flights we hadn’t known about. Epstein was just happily flitting about the globe for years, doing…what? I don’t know. Maybe the CIA does, but they’re not telling. This jumped out at me, though.

Epstein owned a Gulfstream II (sold in November 2013), a Gulfstream IV (sold before his arrest), a Gulfstream GV-SP, and a Boeing 727 (nicknamed the “Lolita Express”) that notoriously ferried notable passengers and girls around the globe. According to flight manifests unsealed in a defamation case against Maxwell, travelers on Epstein’s planes included public figures from Presidents Donald Trump and Bill Clinton to the supermodel Naomi Campbell and the astronaut John Glenn.

Why? How? How does a guy without any kind of college degree, who started out as a math teacher at a private school (he wasn’t even very good at that), and then drifted into banking and finance, get such ridiculous sums of money that they can afford their very own 727? What did he do to earn that kind of money?

Don’t ever try to tell me that the wealthy worked hard and deserve all that money.