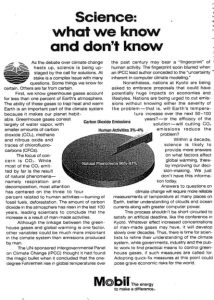 Big Oil would like us all to forget that they lied to us for decades — they tried to tell the public that global warming wasn’t a big deal, it wasn’t happening, and if it was, it was all our fault with our great galumphing carbon footprints, while they were innocently serving our needs and using the profits to do great things for the environment. Now that climate change is here to stay and dramatically and conspicuously affecting our lives, they’d like those campaigns to vanish down a memory hole. Don’t let it happen! The oil companies are literally evil villains, conspiring to cause world-wide suffering in service to their profits.

Mobil and ExxonMobil ran one of the most comprehensive climate denial campaigns of all time, with a foray in the 1980s, a blitz in the 1990s and continued messaging through the late 2000s. Their climate “advertorials” – advertisements disguised as editorials – appeared in the op-ed page of the New York Times and other newspapers and were part of what scholars have called “the longest, regular (weekly) use of media to influence public and elite opinion in contemporary America”.

Between 1996 and 1998, for instance, Mobil ran 12 advertorials timed with the 1997 UN Kyoto negotiations that questioned whether the climate crisis is real and human-made and 10 that downplayed its seriousness. “Reset the alarm,” one ad suggested. “Let’s not rush to a decision at Kyoto … We still don’t know what role man-made greenhouse gases might play in warming the planet.”

Liar, liar, planet’s on fire. These were prolonged FUD campaigns. Scientists knew what was happening and what was going to happen, and they said so, and Big Oil paid pet scientists to lie. It happens every time a company gets huge and its shareholders get greedy and rampant, raging capitalism kicks in to destroy all restraint. This is what the tobacco companies did when the scientific evidence came pouring in that smoking causes cancer — they lied. And they got away with it. It’s what Big Ag got away with with profligate spraying of pesticides. It’s what the oil companies got away with again with spewing lead into the environment.

How are we going to make them pay if we forget how much they consciously, intentionally lied to the world?