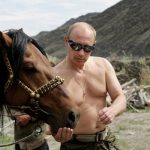 Putin is the new poster child for toxic masculinity. Tell me if this sounds familiar.

Speaking at the annual meeting of the Valdai Discussion Club in the Black Sea resort of Sochi, Putin stressed that his country should adhere to its own “spiritual values and historical traditions,” while steering clear of “sociocultural disturbances” in the West.

Some Westerners believe “the aggressive deletion of whole pages of their own history, reverse discrimination against the majority in the interests of minorities … constitute movement toward public renewal,” Putin said. “It’s their right, but we are asking them to steer clear of our home. We have a different viewpoint.”

Putin, who told the Financial Times of London newspaper in 2019 that liberalism had become “obsolete,” has loudly advocated for what he considers to be traditional family values. In his Thursday remarks, he said the notion that children are “taught that a boy can become a girl and vice versa” is monstrous and “on the verge of a crime against humanity.”

He also suggested that transgender rights supporters were demanding an end to “basic things such as mother, father, family or gender differences.”

Growing up in the 60s and 70s, it was engrained into us that the left were the commies, which was an evil ideology, obviously, and only bad guys would favor the Russians (the hippies were more anarchist than communist, though), while the righteous right-wing was populated with American patriots. Now it’s clear that the conservatives were moving towards totalitarianism, while at the same time the Russian leadership was converging on the same, leaving communism to become synonymous with the criminal right. I can’t see much difference between Russian Putin and American John Bircher anymore.

Genetics According to Jesus » « Someday, I could be a houseplant