Am I missing something here? Here’s an article with the grand title of “Researchers propose expanded evolutionary concept”, which declares that we’re going to have to expand and rethink our understanding of evolutionary theory. “Oh really?” I thought, but I read it with an open mind, expecting some dramatic new phenomenon to be explained. I was a little disappointed to find it was about ramets.

Don’t get me wrong, ramets are interesting, and the paper’s content is fine, if maybe a little overhyped. Ramets are an asexual kind of reproduction, fairly common in plants, where runners sprout shoots that develop into individuals — a familiar example is aspen trees, where a clump of trees, even a whole forest, may consist of clones of a single source individual, each tree born of the original source root system, spawning more roots that generate more ramets that expand the clone.

The paper makes the good point that these organisms aren’t constrained by Weisman’s barrier, which postulates that there is no exchange of heritable variation from the soma to the gonads, which we animals take for granted. If your fingers were irradiated, producing a new collection of mutations in those tissues, it won’t matter to future offspring because those cells don’t contribute to sperm and egg. That would all change if you were able to sprout clonal copies of yourself from your fingertips, like these ramets, because then those irradiated digits would have a way to reproduce independent individuals. It would also be hard to type with all these finger-fetuses growing from my hands.

So in organisms with the ability to propagate from somatic tissues, somatic mutations are a mechanism for generating new variations. That’s the story here. 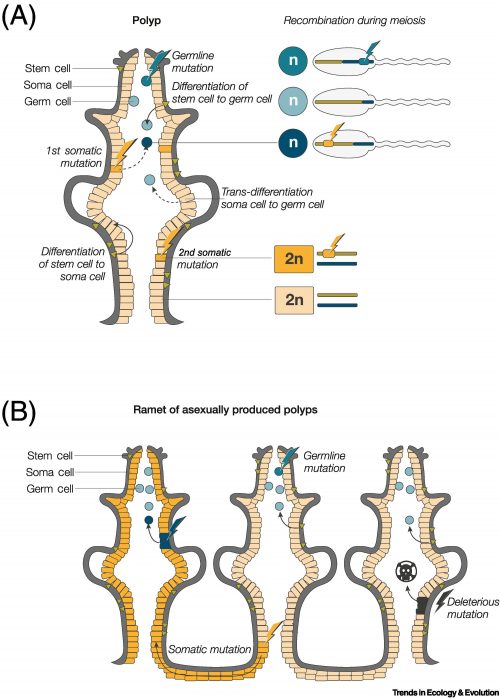 Evolutionary consequences of somatic mutations when they enter the germline.
(A) In most animals, the Weisman barrier between soma and germline prevents transfer. However, germline determination occurs late in plants, fungi, and some basal metazoans. In the hydrozoa, for example, stem cells differentiate into germ cells throughout the life of the colony. In others, trans-differentiation of soma into germ cells may occur. Thus, as somatic mutations accumulate, some may enter the germ line. Once in the germline, somatic mutations are recombined into different genetic backgrounds during meiosis similar to germline mutations. This reduces linkage between potentially deleterious mutations, which otherwise would lead to increasing genetic load. (B) Multilevel selection may also speed up adaptive evolution by providing a first filter of negative selection at the level of cell populations. However, the success of adaptive somatic genetic variation (SoGV) depends on whether they occur in stem cells and the specifics of how new modules arise. Homogeneous modules each arising from single mutated stem cells may compete with each other at the within-genet level and be subject to selection.

Yes, fine, this is an important phenomenon, but is it really new? Does it require bold new changes to evolutionary theory? In my head, I’m quite aware that asexual species can still evolve and acquire new traits, and that is perfectly compatible with the evolutionary principles I understand. There is often an erroneous bias in humans to assume that all populations reproduce sexually, like us, and that somatic tissues can’t propagate from cuttings, like us animals, but evolutionary theory isn’t blinkered in that way. Why is phys.org announcing we need an “expanded evolutionary concept” to account for this? We don’t. This could just be phys.org over-hyping something, as they tend to do.

But no, it’s actually in the paper itself. Oh no, it’s the dreaded paradigm shift.

Evolutionary biology has made tremendous progress in explaining the emergence and maintenance of sexual reproduction despite the two-fold costs of sex. Here, we addressed the flip side of the coin, namely, how do a large number of species cope with extended phases of asexual reproduction that, according to conventional wisdom, precludes the emergence of genetic and phenotypic diversity and hence, adaptive evolution? With empirical data increasingly confirming earlier conceptual work, it is now timely to suggest a paradigm shift that acknowledges the evolution of modular species at multiple levels. Cell lineages evolve within ramets, which in turn are forming asexual populations featuring a mix of mosaic and fixed SoGV. Both of these levels of variation and selection are, in turn, nested within sexually reproducing populations of genets that are corresponding to the ‘classical’ level of individuality in population genetics of unitary species, leading to potentially complex pathways of adaptation that merit further study.

Great, yes, I agree, multiple levels of selection, somatic mutation can contribute to genetic diversity, there’s nothing wrong or surprising about that. But where’s the “paradigm shift”? What’s the part that can’t be accommodated by our current understanding of genes and phenotypes and populations? Come on, people, tone down the exaggeration.

Unless there’s something I am missing here, which does happen. I may be a bit of an animal-chauvinist, so it feels awkward to have to remind a plant-person that evolutionary theory can handle bacteria quite well, so the peculiarities of our multicellular models aren’t necessarily going to require radical renovation of the whole idea.

Uh-oh, I’ve defected to the other side » « Rod Dreher still has a job