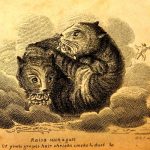 I got the strangest email from Ted Steele, one of those panspermia kooks, addressed to Paul Davies, complaining about priority. Why he wrote to me, I don’t know — I’m not a fan of either of them. It’s just so odd what set these guys off.

I am writing to you directly and to ASU President Professor Michael Crow, and copied to many other scientific colleagues who know exactly what I am talking about [I guess that’s me?]

We are living through our Covid-era where outright lies and misinformation is being pushed on us on a grand scale- by the main stream media in lock step with BigPharma, Big Government and, and in many distressing situations, as we have here, by senior scientists who operate at the sophisticated extreme end of dishonesty, knavery and thievery.

There is a news article in The Guardian newspaper, and, as I now understand it , also promulgated in some low grade science weeklies, which paints Arizona State University’s Professor Paul Davies as the essential founder of the new scientific disciple of Astrobiology.

Viruses may exist ‘elsewhere in the universe’, warns scientist (msn.com)

The article quotes Davies on the possibility of extraterrestrial viruses, which he thinks is possible (sure, why not), but that we shouldn’t worry about them, and he says only a few batty things like this:

A friend of mine thinks most, but certainly a significant fraction, of the human genome is actually of viral origin, said Davies, whose new book, What’s Eating the Universe?, is published this week.

This is scientific misconduct pure and simple – somewhat more sophisticated than many, but misconduct nevertheless. The published scientific record in science is inviolate, it cannot be messed with.

The strong objective scientific concept that the universe is teeming with life and the marshalling of the key evidence, experimental data and observations- and their appropriate critical analysis and interpretation, can be fairly traced and attributed directly to Professor Sir Fred Hoyle and Professor N Chandra Wickramasinghe. These two great scientists are in the that special home that human history knows as the “ Pantheon”.

The Pantheon? Really? I’ve been calling Wickramasinghe the boss of the Panspermia Mafia, but maybe I have to upgrade “mafia” to “cult”.

You allude to Fred Hoyle in your article, but I could not figure out why then there was no proper attribution of scientific priority, particularly because at your Wikipedia site you make the following strong claim in your CV

“In 1970, he completed his PhD under the supervision of Michael J. Seaton and Sigurd Zienau at University College London.[1][2] He then carried out postdoctoral research under Fred Hoyle at the University of Cambridge. “

This claim is then repeated in the Wiki side box.

Why then not cite all the prior body of work by Hoyle and Wickramasinghe and colleagues if you were one of Fred’s post docs?

This is a strange argument. That is what Wikipedia says, but Wikipedia is not Paul Davies CV. If you look at Davies’ actual CV, he doesn’t mention being a post-doc with Hoyle. That’s a curious insertion by who ever did create that Wikipedia entry.

But also, even if he had been Hoyle’s post-doc, that association does not imply that one has to “cite all the prior body of work” in a short article in the Guardian.

But you see that statement in your CV is a lie i.e. untrue, it is bogus. It may well be a real fantasy in Paul Davies’ mind, but it is a lie nevertheless. Fred would be turning in his grave. As I understand it he told you to go away.

If Hoyle told Davies to go away, that would somewhat enhance Davies’ reputation to my mind. Ted Steele, though, must be in his dotage to take such offense at a wiki article that Davies did not write and to be so outraged that a journalist clumped Davies in the same category as Hoyle and Wickramasinghe. He’s just beginning to get worked up.

There are two fundamental conditions that distinguish true scientists from the run of the mill ordinary behaviour, which all real scientists learn as they develop and continue in their search for the truth:

• When the facts change, you change your mind.

• Report and tell the Truth – do not lie and cheat.

These two guiding principles of course are also being torn up on a grand scale right now. But they still need to be restated, and when transgressed, firmly called out :

Paul Davies… you are simply a grub criminal trying to make a fast buck.

The whole matter is really quite disgusting – but has to be exposed for what it is.

Then he goes on to include a link to all of Chandra Wickramasinghe’s articles, because apparently that is what one must do nowadays.

It’s amazing what petty bullshit will trigger the Panspermia Cult. ‘Oh no, you didn’t praise Hoyle and Wickramasinghe enough!’ I also wouldn’t be surprised if Steele and Wickramasinghe and gang are prepared to claim that SARS-CoV-2 fell from outer space. Oh, wait, he already has.

I’m hoping for a Kilkenny-cats-style outcome.

How’s life going for the Nazis among us? » « Midwestern rivers sure are loopy