Not well, as it turns out. Richard Spencer thought he was going to live happily ever after in his mother’s $3 million home in Whitefish, Montana, making media appearances and building a fascist empire and inspiring a new generation of American brownshirts, but he is, ummm, struggling.

In addition to his ex-wife filing for divorce in 2018, Spencer has been denied service in Whitefish establishments and keeps a “very low profile,” according to the Times.

Spencer has also dealt with mounting legal and financial troubles as his attorney, whom he has been unable to pay for his services, withdrew last summer from representing him in a lawsuit over his involvement in the Charlottesville rally, the Associated Press reported.

The trial will begin on October 25 at a federal courthouse in Charlottesville. Case documents reveal that counterprotestors and victims filed a suit against the organizers of the “Unite the Right” rally in Virginia, who will be tried for conspiring to commit racial violence and potential hate crimes.

Awwww. His family broke up. He can’t get served in local restaurants. He’s dead broke. His lawyer abandoned him. He’s got a big trial coming up. And that’s not the worst thing… 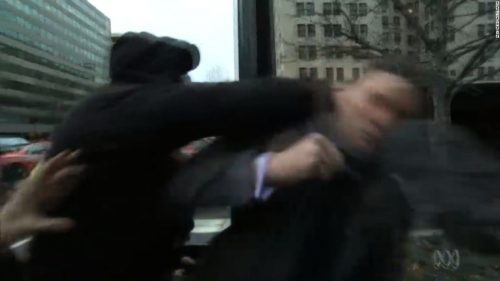 All he will ever be remembered for is that he’s the Nazi who got punched in the face, and the only thing he has inspired is more Nazi-punching.

Meanwhile, another fascist with ambitious aspirations has his dreams crushed. Steve Bannon thought he had a classy joint to act as a base of operations in Italy, but he’s been thrown out and is going to have to look for new digs.

Steve Bannon’s plans to set up a right-wing nationalist “gladiator school” in an 800-year-old Italian monastery now lay in ruins. The Art Newspaper reported Wednesday that the Italian culture ministry has evicted Bannon’s close ally—British conservative Benjamin Harnwell—from the historic building after a long and drawn-out legal battle. The former Trump strategist wanted to bring far-right leaders and enthusiasts from around the world to the monastery in the hilltop town of Trisult. He told The New Yorker this year that the plan was to “generate the next Tom Cottons, Mike Pompeos, Nikki Haleys: that next generation that follows Trump.” However, to Bannon’s fury, Italy’s Council of State revoked the group’s lease in March, and now Harnwell has reportedly been removed from the building.

Anyone got a toxic waste dump they’re willing to share?

I think we ought to build him a legacy by destroying politically all the Tom Cottons, Mike Pompeos, and Nikki Haleys that are still around. What a great success, that he would cite those three as examples of his training.