Mano quotes a study that shows that creationism is in decline.

The public acceptance of evolution in the United States is a long-standing problem. Using data from a series of national surveys collected over the last 35 years, we find that the level of public acceptance of evolution has increased in the last decade after at least two decades in which the public was nearly evenly divided on the issue. A structural equation model indicates that increasing enrollment in baccalaureate-level programs, exposure to college-level science courses, a declining level of religious fundamentalism, and a rising level of civic scientific literacy are responsible for the increased level of public acceptance.

I believe it. I’ve been seeing the same phenomenon — there’s a declining overall interest in creationism. It’s also creatively dead. I rarely see any new arguments, and even the recent books, like the crap from Nathaniel Jeanson, are not original at all, just rewarmed Genesis Flood nonsense spiced up with science buzzwords, poorly explained. It’s a dying cult…just, unfortunately, a slowly dying nonsense.

However, the quantitative decline is made up for with increasing fanaticism among a shrinking minority. The ignorance is being distilled into ever more toxic forms. For instance, Tucker Carlson might once have fit into a model of semi-secular conservativism, is now finding common cause with Ken Ham and QAnon, and accusing the Left of being Satanic. Meanwhile, Ken Ham thinks the movie Cats is some kind of evilutionist plot. 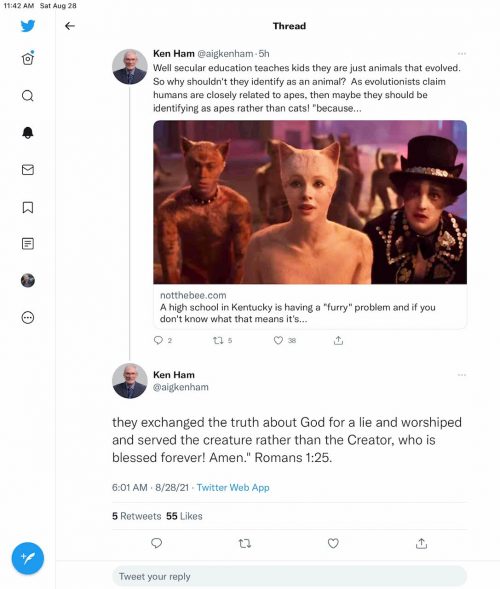 It’s all converging on anti-vax/anti-immigration/anti-climatology/transphobic/anti-science BS. So while the absolute numbers of these dangerous loons are declining, they are becoming increasingly nasty and stupid. We’re not going to be rid of this poison for some time to come.

A kiss on the hand might be quite continental, but heavy machinery is a girl’s best friend » « Another vacation scene