The fall from grace was precipitous, but it should have happened long ago. The molecular biologist David M. Sabatini has been outright fired from the Howard Hughes Medical Institute and the Whitehead Institute, and I wouldn’t be surprised if he also loses his tenured position at MIT soon enough. Can you guess what prompted his ouster?

An investigation found that he had “violated the Institute’s policies on sexual harassment among other policies unrelated to research misconduct.” No details are available yet, but it’s notable that they were serious enough that he wasn’t merely placed on leave, or slapped on the wrist, or placed under tight restriction on his interactions with student. Nope, just flat out FIRED. Tea will have to be spilled sooner or later, though.

This is not entirely surprising, but I had expected the grounds for his dismissal would be over his frequent cases of forged and falsified data that had already given him a reputation, or perhaps over his amazing arrogance. He’s a guy who, when caught with faked figures in his paper, would turn around and accuse the people who disclosed his errors of being “resentful, anonymous, petty, failed scientists”. 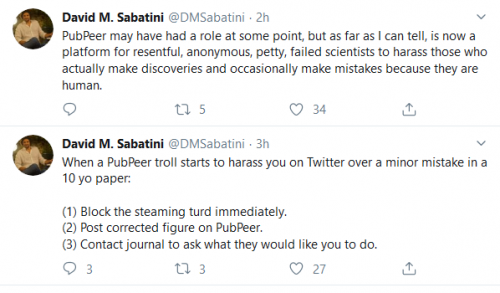 That’s what I thought would bring him down in the end. I hadn’t heard anything about him being a sexual harasser, but we should have figured that that would be a comorbidity associated with terminal cockiness.