So, Aubrey de Grey was accused of sexual harassment, and was under a formal investigation. I guess he wasn’t confident about the outcome, because he tried to apply some pressure to potential witnesses, and got caught. 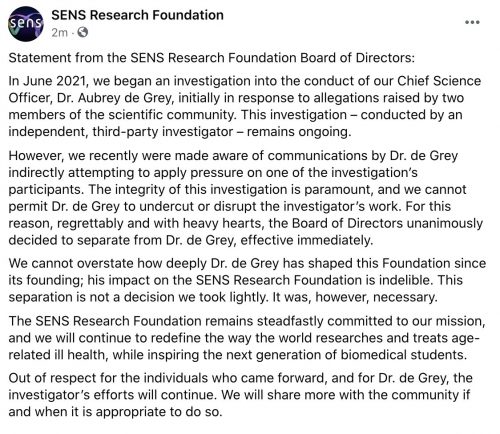 A “necessary” firing by people who are clearly deep admirers of the guy is an interesting combination. It suggests de Grey has been frantic in his efforts to scuttle the investigation to the point his dismissal was completely unavoidable.

I do wonder where he could go after this. I can’t imagine a university would want to be affiliated with him, but maybe some oddball think-tank somewhere would take him on. Or some quack organization — Mercola has money, he could use a celebrity front to help sell anti-aging snake oil.

Uh-oh. This is just going to get weirder. De Grey just posted his response on Facebook, and it’s wild.

with the investigation. Below is the entire text. Decide for yourself. Remember that my mention of the state of Celine’s career “as things stand” was written in the aftermath of the outpouring of support for me and condemnation of her that followed my first Facebook post 24 hours previously.
Let me close by saying that I am in a perfectly fine position to start a new foundation right now, hiring my loyal staff and proceeding as if nothing had happened, but that that is not my plan. I plan to get the truth known, my foundation back, and the bad actors excised from our community. Meanwhile, let’s just keep going.
Text of the email that precipitated today’s action:
———————————————————-
Rght mate, if you care about your (and my, yes) friend Celine you will listen up. There is a job you need to do that probably only you are in a position to do, largely BECAUSE of your rush to judgement today that will have cemented her trust in you.
The six-week investigation into Celine’s allegations against me has concluded. It was conducted by someone named Sue Ann Van Dermyden – look her up – good luck to anyone who tries to paint her as a whitewasher. It has found not only that those allegations are 100% fictitious, but also that Celine’s account of them in her posts and her testimony to Sue Ann is replete with grave inconsistencies – AND, with features that clearly suggest she was fed false information by a SRF board member (which you will probably also have inferred from my Facebook post last night, but then it was just me saying it).
The consequence (other than my reinstatement, obviously) is that a new investigation is being launched, again by Sue Ann, but this time investigating SRF so as to identify the actual villain. The existence of that new investigation is going to be made public tomorrow afternoon – unless, drum roll, it is obviated/aborted by new information.
I probably don’t need to spell out anything more. Celine’s career is absolutely over as things stand, and the only reason it actually isn’t is because I am a man of honour who refuses to let somebody (especially a meteoric rising star) be burned at the stake while an actual villian gets away scot free and is thereby emboldened. Yes she will have to take some lumps for being so gullible, but that’s not such a big deal. BUT, what will completely torpedo my rescuing of her is if she is seen to be resisting the identification of the actual villain. So now, as in tomorrow (Thurs) morning, is the time when Celine needs to find her mojo and spill the beans. As of now, a few people are in the frame as the culprit. Celine needs to name names, and fast, so that no one gets to know that this new investigation is happening as a direct consequence of her insincerity to Sue Ann and the world.
And you need to tell her so, as probably only you can. Go to it.
Cheers A
———————————————————-

“Celine” is Celine Halioua, one of his accusers who has posted a blistering indictment of the man; SRF is the SENS Research Foundation. His defense is…that someone else harassed her? It wasn’t him? He’s just the gallant knight galloping in to rescue her, and her career is over unless she names a different villain. And then he’ll take the SENS Foundation back and purge it of all the bad people who have been conspiring against him. Or start a new foundation of his own. No matter how it turns out, the woman he harassed needs to take a few lumps.

The guy is delusional. I can see why he was fired.

Can schadenfreude kill you? » « I guess David Sabatini is a failed scientist now