The AMOC is the product of a gigantic, ocean-wide balancing act. It starts in the tropics, where high temperatures not only warm up the seawater but also increase its proportion of salt by boosting evaporation. This warm, salty water flows northeast from the U.S. coastline toward Europe — creating the current we know as the Gulf Stream.

But as the current gains latitude it cools, adding density to waters already laden with salt. By the time it hits Greenland, it is dense enough to sink deep beneath the surface. It pushes other submerged water south toward Antarctica, where it mixes with other ocean currents as part of a global system known as the “thermohaline circulation.”

This circulation is at the heart of Earth’s climate system, playing a critical role in redistributing heat and regulating weather patterns around the world.

As long as the necessary temperature and salinity gradients exist, AMOC is self-sustaining, Boers explained. The predictable physics that make dense water sink and lighter water “upwell” keep the circulation churning in an endless loop. 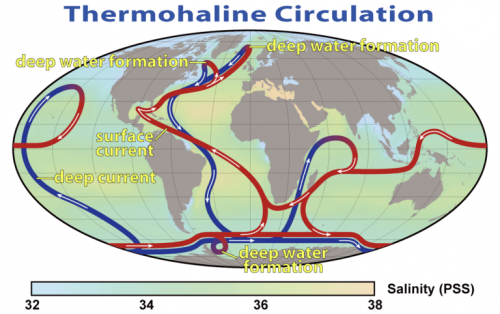 The AMOC moderates our climate and is also essential for things humans like, like the North Atlantic fisheries and the pleasant beaches of the Atlantic coast of the US. You want the AMOC to keep whirling. Seriously, don’t fuck with the AMOC. The bad news, though, is that we fucked with the AMOC.

Human-caused warming has led to an “almost complete loss of stability” in the system that drives Atlantic Ocean currents, a new study has found — raising the worrying prospect that this critical aquatic “conveyor belt” could be close to collapse.

In recent years, scientists have warned about a weakening of the Atlantic Meridional Overturning Circulation (AMOC), which transports warm, salty water from the tropics to northern Europe and then sends colder water back south along the ocean floor. Researchers who study ancient climate change have also uncovered evidence that the AMOC can turn off abruptly, causing wild temperature swings and other dramatic shifts in global weather systems.

We know very well the consequences of disrupting the AMOC. The last time it happened was caused by the abrupt draining of Lake Agassiz into the Atlantic

It’s happened before. Studies suggest that toward the end of the last ice age, a massive glacial lake burst through a declining North American ice sheet. The flood of freshwater spilled into the Atlantic, halting the AMOC and plunging much of the Northern Hemisphere — especially Europe — into deep cold. Gas bubbles trapped in polar ice indicate the cold spell lasted 1,000 years. Analyses of plant fossils and ancient artifacts suggest that the climate shift transformed ecosystems and threw human societies into upheaval.

The Polar Vortex was bad, but you ain’t seen nothin’ yet.

If this critical part of ocean circulation collapses in our lifetime, then can we drag out all the climate-denying Republicans and hang them? It would be more helpful to do it before, but I guess we have to wait until they complete the destruction of human civilization before taking action.