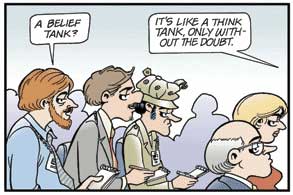 Ahh, the Discovery Institute. A patent pseudoscientific think-tank funded by right-wing millionaires. Doesn’t that make you want to trust them?

They are now cheerfully leaping onto the anti-vax quack bandwagon — it’s where the money is, nowadays. They’ve come out with a new book, The Price of Panic, that tries to claim that the problem isn’t the pandemic, it’s the government’s response to the pandemic.

The human cost of the emergency response to COVID-19 has far outweighed the benefits. That’s the sobering verdict of a trio of scholars—a biologist, a statistician, and a philosopher— in this comprehensive assessment of the worst panic-induced disaster in history.

I think there are about 673,000 Americans who might argue with that. Oops, they can’t — they’re dead. You can always trust those bozos to get everything wrong.

The book is published by Regnery. Enough said.

Anyway, Meyer wrote an advertisement masquerading as a press release pretending to announce a serious idea, and the New York Post snapped it up. It does give you a taste of his bad argument.

As crazy as it all sounds, scientists have long posited the possibility of aliens on our planet. In fact, Francis Crick (who along with James Watson won the Nobel Prize for discovering the structure of the DNA molecule) once theorized that life on Earth was “deliberately transmitted” by intelligent extra terrestrials. Far from being scorned, Crick’s “Directed panspermia” theory was presented at a conference organized by Carl Sagan in 1971 and later published as a scientific paper.

One of the hallmarks of a Meyer book is the constant name-dropping. Oooh, Francis Crick! Famous prestigious scientist indulged in some fantastical speculation, and it got presented at a meeting (this is less impressive than you might think) and published! <swoon> It must be good stuff! No, it’s not. It’s a wild-ass idea that went nowhere. Crick is not famous as a panspermist.

I have theorized that life arose when a Space Winnebago flushed their toilet tanks while visiting Hadean Earth. It doesn’t mean anything. It is not evidence for anything. Unfortunately, I haven’t won a Nobel Prize so I haven’t been invited to fumigate a conference hall with my brain farts.

Watson and Crick discovered that chemical subunits in DNA function like letters in a written language or digital symbols in computer code. As Bill Gates explains, “DNA is like a computer program, but far, far more advanced than any software we’ve ever created.”

Bill Gates is a college dropout who knows nothing about biology, and who got rich on predatory business practices. He is not an authority on this subject. DNA is not like a computer program. It’s a misleading metaphor, applied by a guy who made computers his business. If he’d gotten rich off model railroad gear, he’d be claiming that DNA was just like a track, with switches.

How about Richard Dawkins? He’s got a little more credibility on this subject (but not much, and diminishing every time he opens his mouth).

Evolutionary biologist Richard Dawkins echoes this assessment, noting the “machine code of the genes is uncannily computer-like.” In a recent tweet, he confessed to being knocked “sideways with wonder at the miniaturized intricacy of the data-processing machinery in the living cell.”

No, it’s not. He’s wrong. What does it even mean to speak of “machine code” of genes? Back in the ancient times of the 1970s, I sometimes wrote short bits of machine code, and I fail to see the appropriateness of the comparison. The cell and its genes are not computer-like at all, and it does not contain “data-processing machinery”, except in the vaguest sense of the phrase. This is word salad, written by someone who got a bit too excited about a metaphor. It serves Meyer’s purpose, though, so he goes ahead and uses it.

His purpose is to twist science, even Richard Dawkins’ philosophical atheism, into support for his favored assertion.

Believers in this kind of intelligence greatly outnumber believers in alien astronauts. They have long called this intelligence behind life and the universe by a different name.

They call it God.

It’s totally dishonest, of course. That’s written in the “machine code” of the Discovery Institute.

Meyer isn’t even a very good philosopher. He’s got one note that he bangs on, off-key, while desperately waving at out-of-context quotes from people who actually would strongly disagree with him.

Skip it. Ignore everything from that think-tank of lies.

Way too accurate » « Another Q&A next week today!