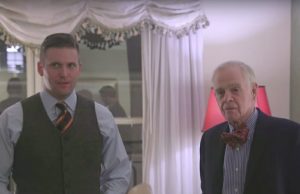 Fuck all these dudes.

Break out the party hats, the millionaire who funded so much evil and misinformation in the world has kicked the bucket, finally.

William H. Regnery II, a racist, reclusive multimillionaire who used his inherited fortune to finance vile white supremacist groups in the hopes of one day forming an American whites-only ethnostate, died earlier this month, his family and associates confirmed. He was 80 years old.

Regnery, whose family amassed riches from its right-wing publishing empire, died on July 2 in Florida after a “long battle with cancer,” his cousin Alfred, the former head of Regnery Publishing, confirmed to HuffPost.

I wouldn’t normally say this about a cancer victim, but jesus, I hope he suffered. He’s the lunatic with a fortune and a printing press who has been bankrolling creationists and fascists for decades. He gets a lengthy obit in the NY Times, the SPLC does a better job. This is the man who founded the National Policy Institute, if you like your Nazis with an innocuous title, and the Occidental Quarterly, if you want your racist pseudoscience dressed up as a pretend science journal.

I’d like to dream that the poison he injected into the nation will rot with his corpse, but I suspect there will be a new snake slithering into his place and his money.

Recipe for a big spider » « Cassandra here; we’re all buggered