Everywhere I go now, people are running around without a mask, like all our concerns about public health have evaporated. Not me. I’m keeping mine for when I’m out and about. 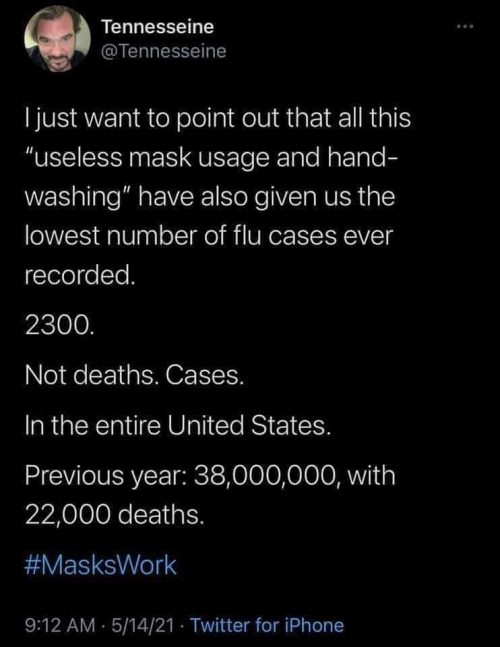 I double-checked those numbers — they’re about right.

According to Scientific American, influenza cases all over the globe have dropped to “minuscule levels.” We’re not seeing nearly the same numbers as we have in previous years because of the health measures in place to help slow the spread of COVID19 — hand-washing, mask-wearing, staying home when sick, and socially distancing.

The publication reports approximately 600 deaths attributed to influenza during the 2020-2021 flu season in the United States, which typically peaks between December and February. Compared to previous years, where the numbers in the 2019-2020 season saw roughly 22,000 deaths, and the 2018-2019 season had more at 34,000 deaths, 600 is a 97 percent drop. So why is that happening? Are the typical flu deaths being categorized as something else?

Nope. The numbers are so low because the flu isn’t around. “There’s just no flu circulating,” Greg Poland, a researcher who has been studying the flu for the Mayo Clinic for decades, told Scientific American. Because of the measures in place for COVID, including increased handwashing, wearing masks, and staying home when sick, no one is out there spreading the flu either.

Who knew just improving the general level of hygiene would be so effective?

The real question is, why are people so eager to return to living in filth? I didn’t have a single day last year where I was too sick to get out of bed, and I didn’t even have the prolonged snotty sniffles of a cold. I don’t miss that.

The only reason I voted for him is because the alternative was even worse » « Do you want to be my friend?