As you should know, Naomi Wolf, former Clinton advisor, is now on the COVID denialism bandwagon. She has gotten worse. Much worse. She has come out with a video denouncing the COVID-19 vaccine as a nanotechnology upload that can be manipulated by developers. Mind control! Tracking! Who knows what nefarious schemes these people are up to.

Note: I have not seen the video. It’s banned everywhere because she’s spreading gross medical misinformation. She has talked about it on Twitter, though, and affirmed that she really wrote this. 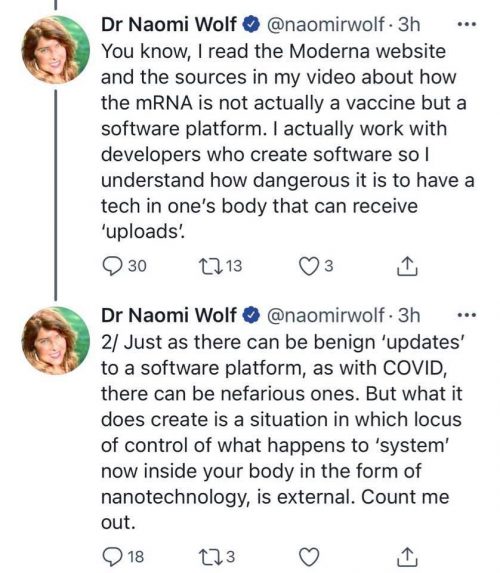 You know, I read the Moderna website and the sources in my video about how the mRNA is not actually a vaccine but a software platform. I actually work with developers who create software so I understand how dangerous it is to have a tech in one’s body that can receive ‘uploads’.

Here’s a link directly to it, if you can’t believe she would say something so stupid. Oh, yeah, she works with software developers so she knows this is possible. She’s also the CEO of a data tech company so she has inside info on Apple’s time travel technology. 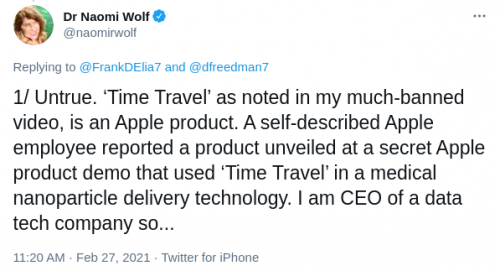 Untrue. ‘Time Travel’ as noted in my much-banned video, is an Apple product. A self-described Apple employee reported a product unveiled at a secret Apple product demo that used ‘Time Travel’ in a medical nanoparticle delivery technology. I am CEO of a data tech company so…

As a branding exercise, though, Wolf has some potent kool-aid. She’s got a fog of science denialists cheerleading everything she writes, and she got invited on the Tucker Carlson show. That’s peak internet famous, right? Getting to promote your nonsense on Tucker Carlson?

She’s so full of herself that now she has offered to join the Republican team in South Dakota.

@govkristinoem
I’ve been a lifelong Dem, Clinton/ Gore team advisor. I don’t agree w/many GOP positions. But basic liberty is being destroyed by Biden/Harris. If you run for Pres., restore freedoms, I’ll do all I can to mobilize support. Heck, I’d join your team if asked.

Was I philosophically checkmated? Don’t think so » « Sarah Braasch lets the world know how evil I truly am