I had a phone conversation with my son, who currently lives in San Antonio, Texas, about the current situation there. They’re having rolling blackouts to deal with the cold and power failures, and oh boy, did his wife give us an earful. She’s disgusted with Texas — she’s from South Korea, and they’d never allow this kind of collapse of services in Korea. They spent a few hours standing in line to get food and water, and today they’re going to the Army base to try and take showers, since they haven’t had any running water for several days.

Meanwhile, Senator Ted Cruz fled the state to vacation in Cancun, Mexico. I’m surprised that Mexico would allow such riff-raff to cross their border. I am not surprised that Chickenshit Cruz would run away.

And (ex)-Mayor Tim Boyd of Colorado City, Texas, posted an amazing rant on Facebook that is so beautifully representative of how Republicans think. 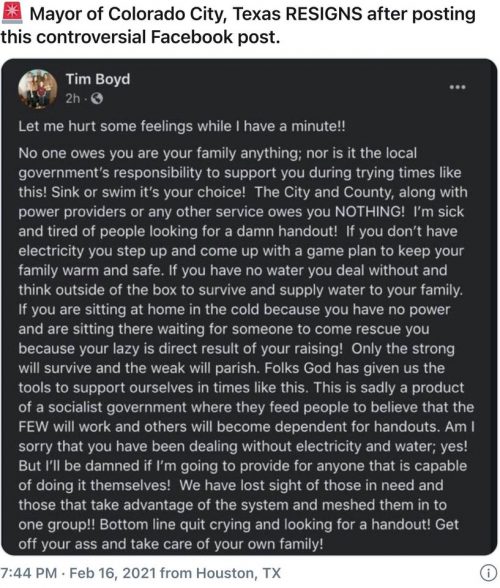 The mayor of Colorado City, Texas has resigned after sparking outrage with a Facebook post where he told residents complaining of power outages during an unprecedented cold snap to “get off your ass and take care of your own family.” Tim Boyd, who announced his resignation Tuesday, also wrote that “if you don’t have electricity, you step up and come up with a game plan to keep your family warm and safe.” “No one owes you or your family anything; nor is it the local governments responsibility to support you during trying times like this! Sink or swim, it’s your choice!” he wrote. The town, with a population of about 4,000, is located in Mitchell County, where many were left without power as record-setting cold weather batters much of the state. In a subsequent post, Boyd apologized, writing, “I was only making the statement that those folks that are too lazy to get up and fend for themselves but are capable should not be dealt a handout.”

Uh, what, exactly, is local government for? When I elect a mayor, or a city council, or a state representative, what I want is a good steward of the resources of my region, who will take responsibility and use those resources to help every citizen. Did this mayor regard his position as a sinecure, or an opportunity to bleed off what he could into his pocket? Maintaining the services that all of those people paid taxes for is not a handout! Even if a citizen did not pay taxes for reasons of poverty or disability, that does not mean you get to deny a responsibility to them. Even Boyd’s “apology” is an insult and a failure to recognize his mayoral obligations.

My daughter-in-law is correct. We should try to be more like South Korea, where the civic infrastructure is taken seriously.

Texans are screaming in outrage, so ol’ Chickenshit Ted is cutting his inappropriate vacation short. But of course he’s got to squeeze out a little extra chickenshittery: he’s asking for the Houston police to protect him from his constituents!

A soothing morning with spiders » « If you’re mourning the death of Rush Limbaugh, you’ve revealed how rotten you are