You should read the whole comic — it’s painfully accurate. 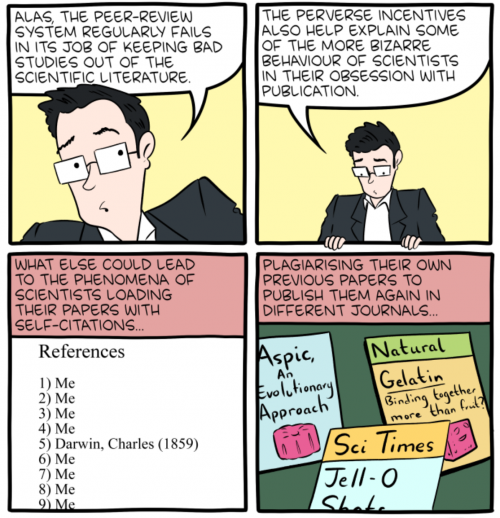 I’ve seen academics form publication rings — not just agreeing to cite each other’s work, but make each other co-authors on all of their papers. I’ve witnessed colleagues put each other down by snarling impact factors at each other. Academia does get ugly.

That said, I don’t know that the remedies suggested in the comic are practical. Maybe the first one would work: having standards and requirements for data sharing, the better to confirm the work. ‘No scientist could possibly object to that,’ I simper naively. Unless there are patents involved.

The second is for universities to change their hiring policies to encourage greater breadth, which would be great, except that the grand poobahs who administer universities tend to be completely disconnected from both the research and teaching going on.

The third is for the funding agencies to wake up and stop throwing all the money to the big flashy projects. There are things like that going on right now, but you know who has the most power in peer review? The scientists who do big flashy projects. 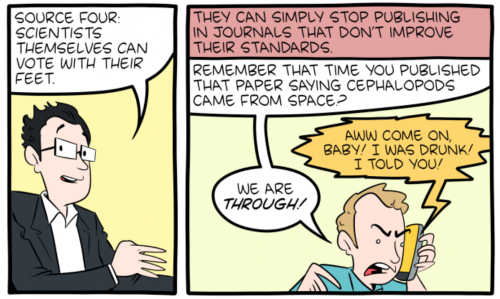 Heh. Where have I heard of that one? The catch there is that that was published by another kind of ring of crackpots, publishing in an obscure specialty journal edited by more crackpots. They can do that. There’s nothing illegal to stop them, and it’s all encouraged by Elsevier, which only cares about money. 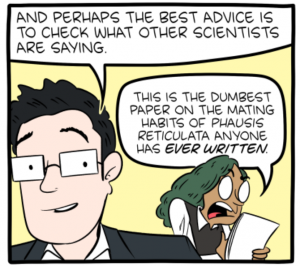 You might notice that more than a few people jumped on that as one of the dumbest papers ever written, but there are no academic incentives at all to do that — you can’t get tenure by being good at cleaning up the droppings of bad science, and if anything, it counts against you. Maybe that’s something that could be fixed, but I’m not counting on it.

So, yes, read it, great comic, very accurate, but maybe too optimistic. We need good goals to work towards, though.