Nice. Paleontologists found a fossil Psittacosaurus with beautifully preserved scales — they can even see signs of the pigments coloring it — and best of all, they found a perfectly preserved cloaca.

The Frankfurt specimen of Psittacosaurus sp. (SMF R 4970) from the Early Cretaceous Jehol deposits of Liaoning exhibits the best preservation of scale-clad integument in any non-avian dinosaur yet described. Preservation of colour patterns and countershading allowed a detailed reconstruction of this individual’s physical appearance suggesting it was camouflaged for life in a shaded lighting environment. It was previously noted that the cloacal region was preserved2, but its detailed anatomy was incorrectly reconstructed. We show here that the fine anatomy of the vent is remarkably well preserved and can be retrodeformed to illustrate its three-dimensional nature. The vent’s scale anatomy and pigmentation are distinct from adjacent body regions, and although its anatomy does not reveal much information about the ecology, or sex, of this dinosaur, it suggests possible roles for visual and olfactory signalling.

The caption to this figure is messed up. The top half, labeled A, is “Cloacal vents across the tetrapod phylogeny”. The text below refers to the bottom half only, and should be specifying B, C, and D rather than A, B, and C. Looks like a job for an editor. 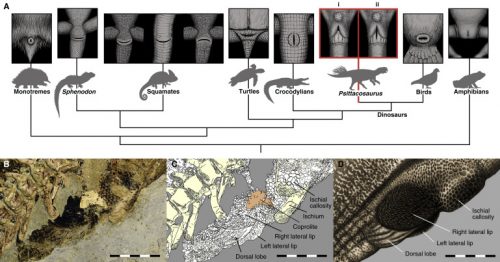 (A) Cloacal vent region preserved in Psittacosaurus sp. SMF R 4970, photographed with crossed polarised lighting. The specimen is exposed in oblique (right) latero-ventral view. The ischial callosity is defined by its bulging appearance on top of the ischium, having large, rounded scales that are heavily pigmented centrally but become lighter marginally. Posterior to the ischial callosity is the cloacal vent, partly obscured by a preserved coprolite and rock breakage. The lateral lips are defined by their distinct outline, indicated by relief and break of slope due to overlap, and are covered by highly pigmented and overlapping scales with lighter margins (Figure S1C,D). (B) Interpretative drawing of the same region as in (A). (C) 3D reconstruction of the cloacal vent in lateral view. (D) Phylogeny of tetrapods illustrating the diversity of cloacal vent morphologies. Two alternative reconstructions are presented for Psittacosaurus sp. depending on whether the cloacal opening forms a slit onto the dorsal lobe, as in crocodylians (ii), or a rounded hole between the lateral lips, as in birds (i).