Science magazine says The legendary dire wolf may not have been a wolf at all, while the actual article published in Nature says only Dire wolves were the last of an ancient New World canid lineage, and says that grey wolves and dire wolves are not as closely related as previously thought.

Dire wolves are considered to be one of the most common and widespread large carnivores in Pleistocene America1, yet relatively little is known about their evolution or extinction. Here, to reconstruct the evolutionary history of dire wolves, we sequenced five genomes from sub-fossil remains dating from 13,000 to more than 50,000 years ago. Our results indicate that although they were similar morphologically to the extant grey wolf, dire wolves were a highly divergent lineage that split from living canids around 5.7 million years ago. In contrast to numerous examples of hybridization across Canidae, there is no evidence for gene flow between dire wolves and either North American grey wolves or coyotes. This suggests that dire wolves evolved in isolation from the Pleistocene ancestors of these species. Our results also support an early New World origin of dire wolves, while the ancestors of grey wolves, coyotes and dholes evolved in Eurasia and colonized North America only relatively recently.

OK, then, what is a wolf? If we saw a large canine that hunted in packs nowadays, wouldn’t we call it a wolf, while recognizing that it could be distinguished scientifically as a different species? What does “closely related” even mean?

I looked at the results. 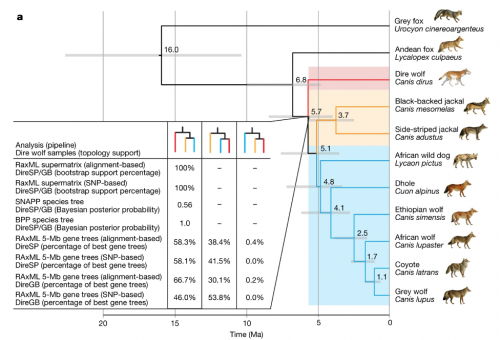 Dire wolves were wolves. They’re a distinct lineage with an interesting history, but I’m not particularly interested in arguing about whether certain colloquial terms or folk taxonomy are appropriate.