We watched the notorious movie last night, including the infamous closing scene with Rudy Giuliani.

Sorry to disappoint you, but yeah, he was just tucking in his shirt.

It was still stupid and inappropriate, just not as scandalous as everyone was imagining. Giuliani was smarming it up with a pretty reporter, smirking and flattering her. Nothing wrong with that, I guess, except for the condescension and DEAR GOD GIULIANI SHOULD NEVER SMILE. He looks like a creepy skull.

He is then invited into her bedroom for a drink. And he took her up on it! Extremely unprofessional and sleazy! I’ve done many interviews in hotel rooms, and if at the end I was invited to go into the bedroom for a drink (never happened, my interviewers were professional too), I would have said, “No thank you, I’ve got to go” or, if we wanted to continue the conversation, I’d have suggested that we meet in the bar in a few minutes.

Then there was a scene where the two of them were fumbling around removing each other’s microphones. Unprofessional again; yes, you thread the wire from the lavalier mic under your shirt to the transmitter, but it’s not a big production. A reporter would find this part of her daily routine, while a guy like Giuliani has done this a thousand times. He wouldn’t need assistance, and neither would she. I’ve done it a hundred times, usually standing up on a stage, sometimes right in front of everyone. It doesn’t involve taking off my pants.

It does, however, sometimes involve unbuttoning a shirt, and then tucking it back in. That’s what I saw Giuliani doing. It wasn’t a big deal at all.

Also, remember, there was a cameraperson recording it all. What Sacha Baron Cohen caught on film was a creepy politician being condescending and unprofessional, nothing more. It was disappointing, actually, and was simply some unflattering editing of an already unpleasant character who thinks he’s attractive and endearing, when he just gets more repulsive the harder he tries.

The attention that bit is given also detracts from the rest of the movie. The truly horrifying parts where when he got his audience of good ol’ salt-of-the-earth Americans to go along with his prompts: an audience of rednecks grinning like feral hyenas as he gets them to sing along to a bad tune he was making about gassing their political opponents to death; the casual and easily elicited antisemitism; the QAnon fans babbling their conspiracy theories; the weird debutante ball where the Southern gentlemen were locked in rigid politeness as Borat’s daughter does a fertility dance celebrating her menses, and the most they do is hiss, “call her an Uber”.

As is usual in a Sacha Baron Cohen movie, the real freaks we should pay attention to are ourselves, not the clown with a funny accent capering on the stage. Borat couldn’t make Giuliani more of a spectacle than he routinely does to himself on Fox News every day, so I thought that bit fell rather flat.

Also, it was an out-loud, unapologetic feminist movie. Let’s not forget that in all the noise about the final setup. 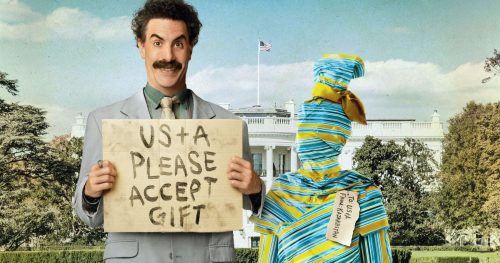