I’m not going to write about last night’s debate, because a) I only saw a few moments of it and b) I cannot bear it. I spent my evening grading exams while playing a movie in the background because that was a less agonizing use of my time. Maybe you’d like to hear about the movie instead? It was crap, but it warmed my heart anyway.

The movie was Die, Monster, Die, and I first saw it when I was 9 years old. It triggers a cascade of remembrances, most of which have nothing to do with the movie itself, but with the circumstances. If I had to pick a happy moment in my life to dwell in for eternity, it would probably be being 9 again.

The context first, what came before. My family had gone through a rough patch, what we’d now call “economically distressed”, where everything conspired to increase our misery. My father was, as he was for many years, struggling to feed his family. He was on the Boeing roller coaster, occasionally getting a job with good benefits at that company, only to be laid off shortly afterwards and have to scramble to find some miserable manual labor job. My mother, with 4 kids, had tried to get a job herself, and this had increased Dad’s distress — he was a man of the mid-1960s, after all (he got better). If I had to name a moment of misery in my life, it would have been the year before when my parents were fighting and threatening divorce and I was totally bereft.

I also had a grand extended family. In my childhood times of trouble, I’d stay with my grandmother. My Uncle Ed lived with my grandmother, and he was one of those man-children who doted on his nephews and nieces, and had a near-total lack of ambition. He was always cheerful, though, and he seemed to have a thorough understanding of what children liked, because he was one himself.

On a fairly typical weekend, my brother and I would spend it with my grandmother and Uncle Ed, and get indulged. A great Friday evening would start with getting out of school, having dinner, and then going off to grandma’s house. Uncle Ed would take us to Stewart Drug in downtown Kent, and we’d buy comic books, come home, and lounge about for a while reading. Then we’d head over to the Vale Theater if there was an interesting movie playing (I’m getting to the movie, don’t worry!). After the movie, we’d get home to put on the Friday night creature feature, and stay up ridiculously late while Ed fell asleep on the couch.

So finally, this one night, the movie in town was Die, Monster, Die, irresistible bait to a 9 year old. We piled into Ed’s old Ford and trundled off across town. It was going to be a thrilling experience, even if an honest assessment of the movie is that it was fairly typical American International Pictures cheese, mainly about milking the name of its star, setting the stage with nice set full of creepy staircases and cobwebs, and throwing an occasional jump scare at us. In the 1960s, though, a jump scare was the sudden appearance of a bunch of rubber bats on strings. That was enough.

The star was Boris Karloff. 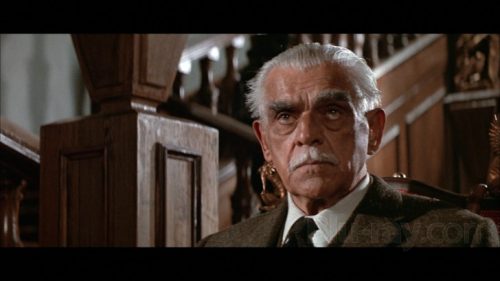 The story was based (loosely) on HP Lovecraft’s “The Color Out of Space”. There was another recent remake of the story, I think because it’s a classic of familial anxiety. It’s about a family that finds a mysterious glowing rock that corrupts everything — it generates monstrous growth and slowly poisons the family and leads to horrifying mutations.

It’s a metaphor for capitalism, you know.

So Karloff has a greenhouse full of giant plants and a zoo from hell, all made by tainting them with fragments of glowing green rock.

But his intentions are good! He wants to feed the world, he thinks his mysterious rock will lead to prosperity and restore the reputation of the Witley name. He continues to think that as his loyal servant, Merwyn, sickens and eventually dies, leaving a greasy stain on the floor. His wife Letitia is confined to her bed, her skin turning grey and mottled, begging her daughter and her boyfriend to escape while they can. Eventually Letitia goes mad and attacks everyone, her head covered with horrible growths, and she dies and decays in front of everyone’s eyes. That finally convinces Boris that he’s wrong, and he goes to destroy the rock with an axe, but is attacked by the family maid, also made monstrous by the malignant influence of capitalism the color out of space, and she pushes Boris into the rock, and he starts glowing and raging and rampaging, until the boyfriend knocks him off a balcony and he falls, his glowing body parts explode in blood and fire, and the movie ends with the family mansion burning down.

For some reason, this cheaply made “B” movie resonated with young Mr Myers. I was on the edge of my seat the whole time — the ghastly fate of the Witley family worried me so much and I took the deaths personally. I still remember the highlights of that otherwise nondescript cookie-cutter horror movie.

The other thing I remember is the ride home in Uncle Ed’s 1950s era car, the one with the high bench seats and no seat belts, of course. Those seats weren’t flush with the floor, and I was positive there was a monster under them, waiting to grab my ankles with malformed glowing claws, so I rode all the way home with my feet up on the seat. It was the only way to be sure. I didn’t sleep well that night, either. It was a great experience!

So I rewatched the movie last night while grading papers. It was a trifle, not too distracting, and it was bad. Not recommended unless you’re also carrying similar baggage, and unless the alternative is some ghastly shitshow. I won that evening!

Come to think of it, though, it would have been entirely appropriate to title the debate “Die, Monster, Die.” Can we please get rid of the green glowing rock imbedded in the heart of America? I want a simple solution like that, even if it ends with the entire goddamn thing burning to the ground.

Sex toy or religious artifact? » « For those of you about to die, I salute you