In the news, residents of Bristol tore down a statue of Edward Colston (1636-1721) and threw it in a river. 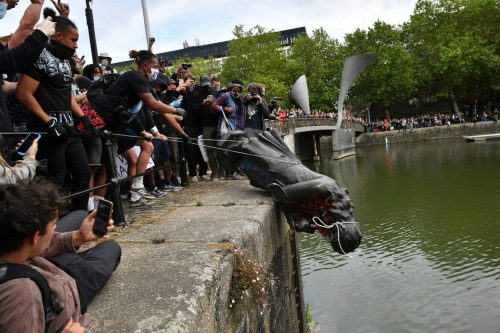 I knew nothing about the guy and had to look him up, where two prominent facts are mentioned.

A. He made a lot of money in the slave trade. In fact, he held the highest office in the Royal African Company, so he was the head honcho of the institution responsible for the British side of the slave trade.

B. He was loved in Bristol as a tremendous philanthropist, founding churches and hospitals and poorhouses, and was spending a lot of money on local, British charities.

Huh. So he was busy generating great misery in the black people of Africa, and using the profits from that ugly enterprise to benefit the white people in his hometown. Those two perspectives are irreconcilable, unless he also thought his black victims were undeserving or non-human. I rather suspect that the suffering he caused greatly outweighed the good he did at home, especially since his goodness was fortuitously focused on maintaining the institutions that kept him wealthy and powerful. So, yeah, throw his monument in the river. Recognize that the good we do for our local benefit has to take into account the global harm that we do.

It’s also an interesting example of how European communities benefited at the expense of African and Asian peoples.

Let there be change at last » « Hallelujah!