The Asheville police bravely assaulted a first-aid station. It was clearly marked, it was staffed by doctors, nurses, EMTs and such people, and no one in the group was participating in the protests. They were just there to help people. Yet the police charged in, knifed all the water bottles, looted bandages and sutures, trashed everything in sight, and harassed the medical staff.

The excuses given: they were only supposed to confiscate medical supplies (why?). They had to search for explosives (in a med station?). They had to get rid of the water bottles, because protesters had thrown them at the police.

Take a closer look at those police. 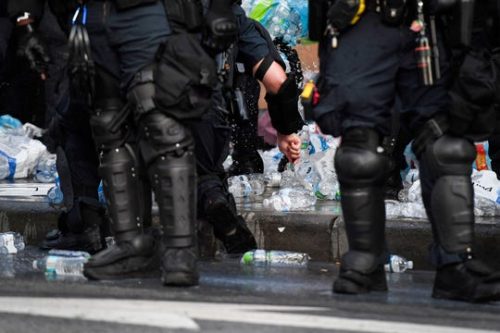 Holy crap. They’re armored up like storm troopers from Star Wars. And they’re afraid of thrown water bottles? Did they watch Return of the Jedi, think it was a documentary, and worry that there were Ewoks among the protesters?

I also have to point out that they chose to fight medical assistants who have been struggling to get proper PPE for months, and who in this bold assault were wearing t-shirts and handkerchiefs tied over their faces, and were volunteers who weren’t getting paid. How much overtime did Asheville sink into depriving its citizens of medical assistance?