We’re in a time of crisis, when a sense of injustice is acute, when communities are in flames and people march in protest, when white supremacists run the country and the police have willingly become a tool of fascism. What we really need right now is some clueless dweeb from Harvard to come along and reassure us that it’s all an illusion, the country is really becoming less racist, therefore all you white bigots out there can relax and not feel guilty because the statistics say you are all becoming better angels, even if you’ve institutionalized social norms that allow black concerns to be minimized even as you’re throwing huge numbers of them into an inhumane prison complex. That dweeb is the self-appointed guru of white denial, Steven Pinker. You can always count on him to show up at a cataclysmic failure of the system to let us know that this terrible event doesn’t really expose an ugly reality. Everything is getting better, don’t you know. So he takes to twitter to make his usual Pollyannaish pronouncement.

Harvard Social Science Dean Lawrence Bobo did the research I've cited on the decline of overt racism in the US. Here he reflects (w cautious optimism) on race relations in the the context of police killings of black men https://t.co/LAJeFjtCey via @Harvard pic.twitter.com/zXdejdBv3q

Good god. He’s a psychologist. He has to know that people are really good at rationalization, making self-reported attitudes difficult to trust. Look at this one graph he shows (as if a graph is more powerful than one photo of a cop with his knee on a black man’s neck): 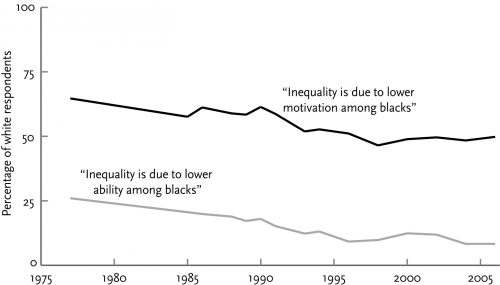 What, exactly, is that supposed to demonstrate? That white people have become less racist since the 1970s, or that racists have been shifting their rationalizations since the 1970s? Are “Inequality is due to lower motivation among blacks” and “Inequality is due to lower ability among blacks” the only two excuses white people give for discrimination, so those two responses encompass the totality of the rationalizations? Has he even considered that both responses are pretty damned racist and are centered on explaining the othering of black people? Has he considered that a shift in what is socially acceptable to say in public doesn’t necessarily imply a shift in underlying attitudes?

Also, wow, over half the white respondents are making those two equally racist arguments. I don’t find this at all reassuring.

Pinker is referencing a black social psychologist (also a big shot at Harvard, which ought to be a caution to anyone reading their work — he’s black, but also in a highly privileged position) who is also cautiously optimistic about the future, but isn’t trying to bury the lede in happy-clappy noise.

We had all thought, of course, that we made phenomenal strides. We inhabit an era in which there are certainly more rank-and-file minority police officers than ever before, more African American and minority and female police chiefs and leaders. But inhabiting a world where the poor and our deeply poor communities are still heavily disproportionately people of color, where we had a war on drugs that was racially biased in both its origins and its profoundly troubling execution over many years, that has bred a level of distrust and antagonism between police and black communities that should worry us all. There’s clearly an enormous amount of work to be done to undo those circumstances and to heal those wounds.

Pinker really is the Norman Vincent Peale of our generation. We don’t need some racist-leaning, evo-psych-loving, IDW-associated professor telling us that everything will just get better gradually over time if we’re patient and wait for white people to become more tolerant. Action is the agent of change. Every incremental shift is the result of people standing up, speaking out, shoving reality in the face of the complacent and demanding change. There is no magic internal trend towards less racism, especially not among the people who hold all the power.