The Bloomberg campaign claims to have discontinued this practice, but they were using prison labor to make campaign calls.

Former New York City mayor and multibillionaire Democratic presidential candidate Mike Bloomberg used prison labor to make campaign calls. Through a third-party vendor, the Mike Bloomberg 2020 campaign contracted New Jersey-based call center company ProCom, which runs calls centers in New Jersey and Oklahoma. Two of the call centers in Oklahoma are operated out of state prisons. In at least one of the two prisons, incarcerated people were contracted to make calls on behalf of the Bloomberg campaign.

Sweet! It’s good to be in Minnesota, where we’ll be mostly ignored throughout the campaign season, but it must be reassuring to Iowans to know that some of the election noise they get dunned with is produced by slave labor.

Oh, not quite slavery: the prisoners get paid, sort of.

John Scallan, a ProCom co-founder, said his company pays the Oklahoma minimum wage of $7.25 an hour to the Oklahoma Department of Corrections, which then pays the incarcerated people working in the call centers. The Department of Corrections website lists the maximum monthly wage for the incarcerated at $20 dollars a month, but another policy document says there is a maximum pay of $27.09 per month.

When asked if their total monthly earnings are capped at these levels, Scallan said incarcerated people who work for ProCom make far higher wages. “I can tell you unequivocally that is not us,” Scallan said. “Some of them are making that much every day.”

Let’s do the math. $7.25 an hour is $58 per day; if they work them 4 weeks per month, that would be about $1100 dollars per month, which isn’t much of a wage. But the prisons cap their earnings and skim off most of the money. In the worst case of limiting them to $20/month, the prison is making $1080 off their labor. In the best case, where they’re getting paid $27/day, the prison gets about half their earnings.

I wonder if there is some kind of profit motive driving mass incarceration in the United States? Nah, couldn’t be. That would be evil. This Republican, for instance, wouldn’t be evil, would he? 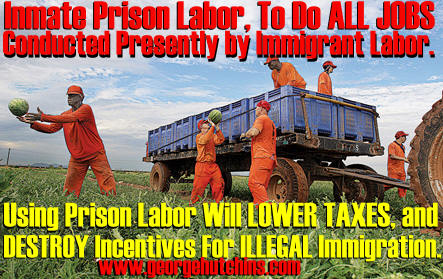