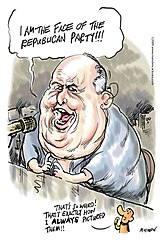 Like an empty gasbag should? I guess he’s still ranting on the radio, but I haven’t heard from him in years, and apparently he hasn’t mellowed or acquired the wisdom of age yet. He’s still one of those people who is responsible for some of the worst science denialism, like this:

The first thing to notice about Greta Thunberg is that she’s 16 years old. She claims she has Ansperger’s type — Ausperger’s — or autism — Asperger’s — some kind of problem in that area.

And so she is made the Person of the Year by Time magazine, which is what? A political news magazine. Greta Thunberg has been introduced into the political arena by the worldwide left, including the Democrat Party. They have made her a political figure. They do this on purpose.

So she’s out tweeting and politicizing, and she is free to lie and say whatever she wants to say about climate change and who’s responsible for it. And nobody is permitted to question her, you see, because she has — what did they call it? She is in the autism spectrum, so you can’t disagree, you can’t question, because she’s not well.

Yes, Time Magazine’s person of the year is popular fluff chosen to sell magazines. It doesn’t mean much, except that it throws a certain kind of person into a tizzy. There is no “worldwide left”, it’s very disorganized, and the Democratic Party is a centrist political party at best, not at all aligned with the Left. Time Magazine is right-centrist outlet that is not controlled by the Left, nor does it lean Left by any sensible meaning of the word.

Greta Thunberg has achieved notoriety because she ably represents a scientific consensus, and is angry and vocal about the way the Old Guard has wrecked the environment and set us on a path to environmental catastrophe. This shouldn’t be an exclusively Leftist awareness; the only reason it has a political dimension is because the Right, including decrepit gasbags like Limbaugh, have made a refusal to recognize the consequences of our technological/industrial/capitalist society. Reality ought to be apolitical. Our process for dealing with reality is most definitely a political concern. But the Right is simply refusing to deal, denying the observable phenomena looming on the horizon and sweeping in fast.

Thunberg is autistic. That is simply a different way of thinking, and to label it as a “problem” or “not well” is disgraceful. She has made her autism a strength and has used her personality to present her ideas forcefully to the world community, and has constantly demonstrated her effectiveness as an advocate. Never has she hidden behind her nature to refuse to answer questions or to disallow any questioning. However, flatly declaring her ill to avoid addressing the problems she presents is not questioning her — if you want to criticize her, go ahead, discuss the evidence against global climate change.

Limbaugh can’t, because there isn’t any, and also because he’s an ignorant coward who’d rather label someone with a syndrome so he doesn’t have to face his shortcomings.