A while back, I told you I had a slight problem: I probably had two nearly indistinguishable Parasteatoda species in my colony, P. tepidariorum and P. tabulata. The way to tell them apart is by close examination of their genitals, or by dissection, and a) I don’t have the skill to do that, and b) I’m trying to maintain a live, breeding colony, so taking individuals apart to figure out their sex is off the table.

I did hatch a cunning plan, however, to get a provisional identification. P. tabulata is known to build nests from scraps of debris and wind-blown litter, so I thought maybe I could get a tentative guess at their taxonomy by cluttering their cages with scraps and seeing who built homes for themselves. It’s not at all definitive, especially since they’re all living in a sheltered environment right now and even P. tabulata might find nesting superfluous, but I raided the department’s paper shredder and hole punch for little bits, and scattered them in all the tanks.

Most of the spiders ignored them. They couldn’t eat them, after all. But a few have slowly dragged bits and pieces of paper towards their roost and built little hidey-holes. Here’s Melisandre: 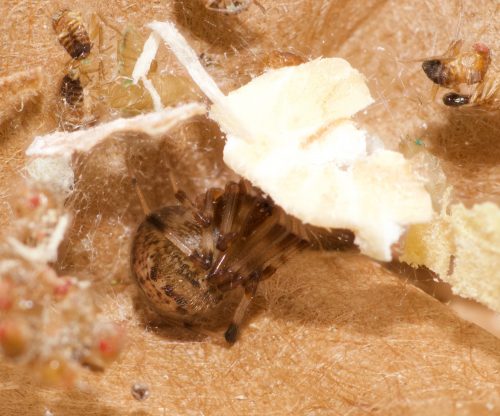 So maybe I can put together a rough behavioral test to estimate who is who? I don’t think a real taxonomist would be satisfied with it at all, but it’ll be useful for me, making it less likely that I send a P. tepidariorum male off to mate with a P. tabulata female, which probably wouldn’t go well.

By the way, P. tepidariorum is thought to be native to the Americas, that is, it hitch-hiked here with the first humans to move here; it colonized Europe when the human colonizers boats sailed back home. P. tabulata is probably native to Asia, and emigrated to the Americas and Europe much more recently. Both are thriving almost everywhere humans live now, but the timing would suggest that the two species diverged at least 15,000 years ago…or about 15,000 generations ago. It’s kind of neat how their morphology hasn’t drifted apart much, but their distinct genitalia make an uncrossable reproductive barrier.